Please feel free to repost. Or, if you know of other, similar posts/threads, to link to them in comments.
If you’re an author doing direct digital sales from a web site you manage/control (meaning in addition to whatever you’re doing through Amazon, B&N, iTunes, Kobo, Smashwords, Direct2Digital—or whatever)…

For those who wonder why one would do such a thing, there are two primary reasons:

I haven’t updated the spreadsheet I pulled a few weeks ago, but here are the numbers from the last I pulled.
There are some data quality problems here. The low end of people who say they’re making a living writing? I don’t think $450 is a likely real response. Likewise, some of the higher numbers from people who say they’re not making a living writing would be perfectly respectable incomes for many. I’m not judging people’s responses here, just pointing out that there may have been some incorrect yes/no responses.
And, as always, this is self-reported data, so take it with a grain of salt.

Authors Who Say They’re Not Make a Living Writing

Publishers Weekly has been publishing the top 25 bestselling self-published works on Smashwords each month. Here’s February’s list.
I’m not the least bit surprised that Romance is the top-selling category in terms of those top 25. What does surprise me, though, is the overwhelming percentage of those titles that are romance: 2/3 if you include the related genres of YA Romance and Paranormal Romance. I’m also surprised that Fantasy does as poorly as it has been.

This page is not affiliated with authorearnings.com. Rails app to generate this can be found on GitHub. Some earlier charts are here.
Table columns are percentiles: 25% means that, if you line everyone up in order, 25% made that or less.

Context: this post from Cassie Alexander.
Cassie, I’ve known you for a long time. We’ve spent nights writing in chat, on Twitter, at conventions, all kinds of things. I remember you bringing your (impressively large) box of rejection letters to BayCon one year before you had a pro sale.
I love you so much I even set foot in a Scientology building for you (because I said I’d be there for you for Writers of the Future) even though I hadn’t done that in many years.
I’m sorry that St. Martin’s has dropped your series, which I’ve loved. (And I feel guilty that I didn’t do as much as I’d have liked to help promote it, and I’m a shitty friend that way. Sorry.)
I’ve never known anyone as dedicated to their art as you are. You’ve written nine novels in the same time I’ve written four (and a half). I keep getting novel ideas, though, and series ideas.
The early days of self-publishing (via POD) were fraught with peril. I remember when I worked at Kepler’s that we wouldn’t order them because they were often so poorly produced (and I’m not just talking badly edited, I mean the covers would fall off, etc.) that they were just too problematic.
The world has changed, though. The production values on POD are now indistinguishable from traditional printing, and e-books have available samples, so there’s little risk. Now you can look and determine if it really is something you want to buy.
There’s a very, very real market and some good strategies for reaching it. And, I’m finding out, that the strategies that work for that are those that don’t work for the traditional market at all.

One of the problems with The Dip is that you tend to look at your failures, but not your successes. Losing a book contract is a hardcore dip point.
What’s easy to overlook is that you’ve had amazing success as a writer. You were contracted to write a five-book series—and you did. Four of the volumes are in print and one will be out soonish.

Moving on to Indie Publishing

Many of the successful indie authors have an seasonal/episodic approach to books. It’s a familiar paradigm in this culture of TV viewers. Instead of one longer novel, the books are novella length, and released as episodes. A season is often six episodes. Because they’re novella length, three makes a nice size paperback.
So the marketing goes like this:

It’s rather brilliant, actually.
I was thinking about the whole idea of episodes, and, personally, I’m a fan of thirteen episodes to a season. Gives a great chance for reversals of fortune, too. Two six-episode arcs, a thirteen-episode arc, and a standalone in the middle.
The real point, though is to publish and market fairly consistently: have a predictable release schedule.

But at the time, I thought, oh, no way, that’s too silly. I’m a Real Writer and I shouldn’t concern myself with smut…even though I happen to be perfectly good at writing it, heh!

Faruk Ateş raised the “real” issue on Twitter today, so I’m going to quote two of his tweets (the first not being aimed at you, obviously, it just gives context as he was wound up about someone’s writing):

“Real” as an attributive adjective has taken on the meaning of revealing that the author doesn’t know what they are talking about. link
“Real women” — meaningless; every woman is a real woman. “Real work” — no work is more “real” than any other. “Real game” — please shut up. link

It’s all real.
So do some cool stuff. I’ll be along for the ride.

We have released a new version of Sales and Trends on iTunes Connect that introduces interactive features to help you better understand your sales data.
You now have the the ability to:

Woohoo!
I love charts and graphs.
So I log in.

So. There you go.
Love the update. Thanks, Apple!
This post has the iBooks numbers in context with other sales outlets. For context, this is a republication of a short story which I also sell directly.

Both are good news. I like good news.
First, Kobo payments are monthly if—and this is kinda confusing so I’m just going to quote them directly:

Hat tip to reader Jerry for that. Thank you!
I’m not sure what “content has generated” means here, though. Sales? Royalties? I have a cold and just don’t have the energy to read the other pages in the document right now.
Source: pp. 29-30 of their User Guide
Second, I’d had on my pages forever that Apple’s iBooks paid out only once you reached $150. Then I noticed I’d had a payout of a bit over $5 a few months back, so that’s not the case. Yay.
I have updated the notes page accordingly.

There’s a lot of interesting information in the Author Earnings survey that Hugh Howey and others are working on. Hugh’s posted a preliminary link on Twitter, and you can watch the live data coming in.
I decided to do some breakdowns of the really early data: self-reported 2013 income.
[fancy_table]

[/fancy_table]
Let’s look at the self-published percentile numbers a little more (and the clever plug for a forthcoming book that neatly echoes the graph’s shape). (Click to embiggen)

In two charts.
I worked at Apple, so it’s not surprising to me that I sold more copies through iBooks than is generally true for other authors. What did surprise me was the relative number of Nook book sales.
Because this is a short story, here are the royalty percentages per sale: Amazon 35%, Nook 40%, and iBooks 70%.
As far as absolute amounts, let’s just say that it’s possible to carry the number of lattes I could order with the amount of money I’ve made, but it would be an awkward number to carry, even from expensive frou-frou coffee places like Blue Bottle and Chromatic. 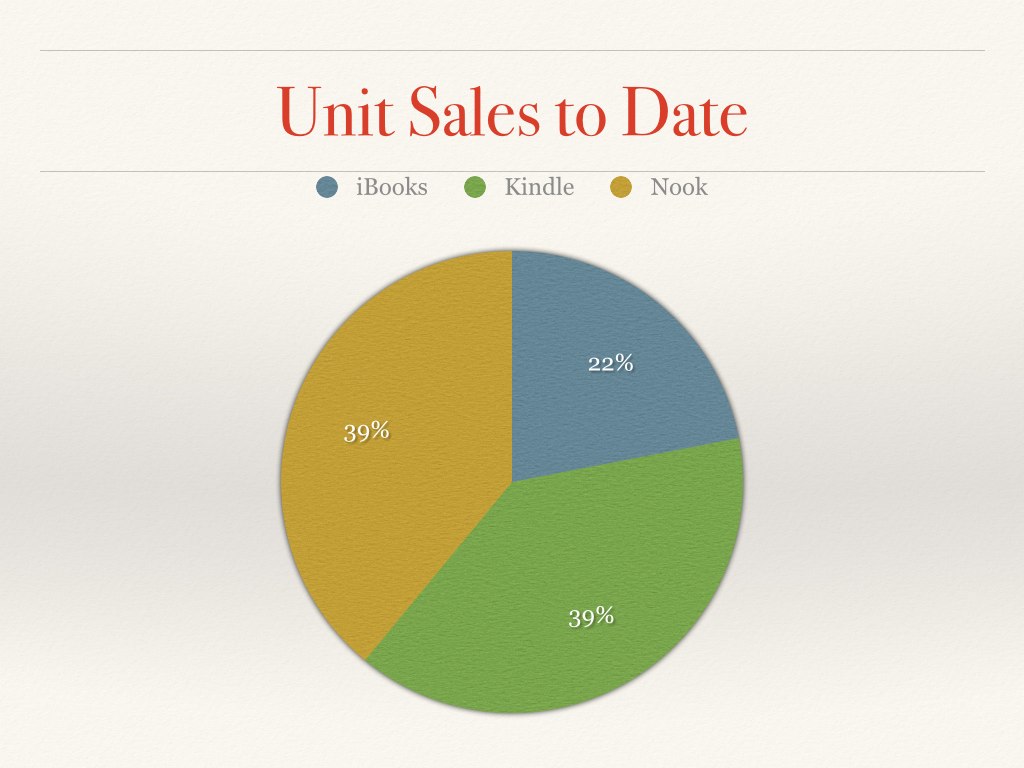 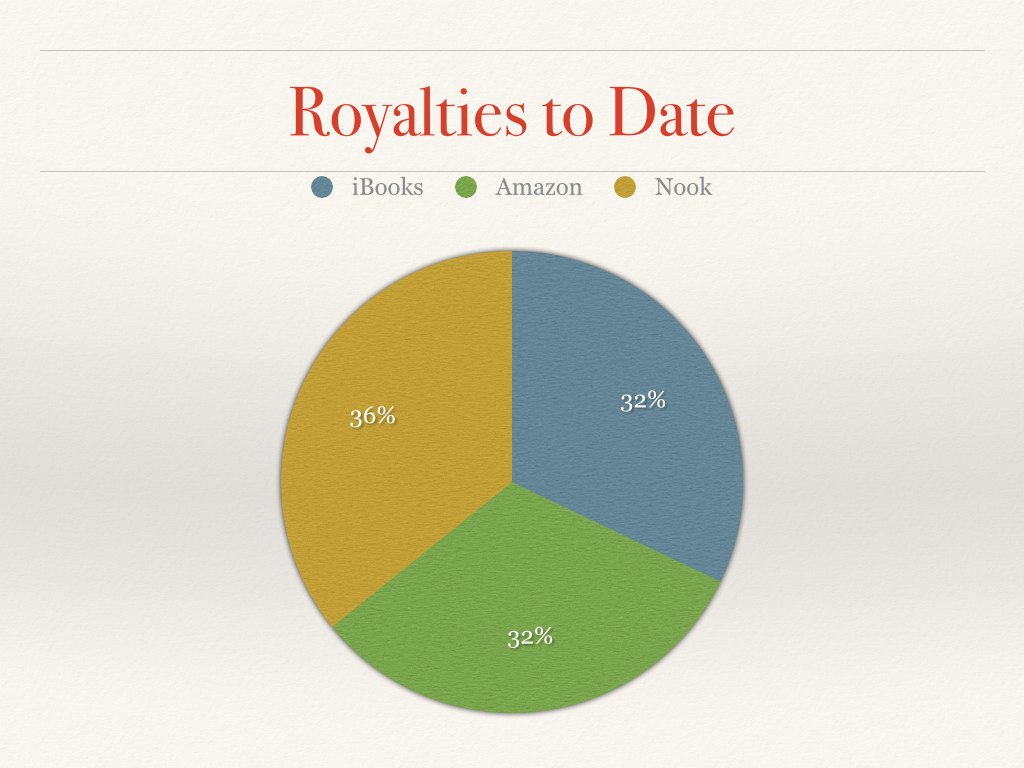 I made, to the penny, identical amounts from Amazon and iBooks. Amazon includes foreign sales from Germany and UK; iBooks included Canadian, Australian, and UK sales. For Nook, I only have US sales, though I have enabled worldwide sales.

Coffee & Canopy is a forthcoming book about our experiences in Costa Rica and Nicaragua. Monkeys! Crocodiles! Bats! Venomous sea snakes! Volcanoes! Cover photo is one I took of Nicaragua’s Masaya volcano.

The “travel diary” series will be novella length, have selected color photos (as well as the occasional black and white), and will be digital only. I’ll also have PDF as a format option for this series. Price will be $2.99.

So You Want to Travel the World

Would you like to travel more? See the world? Get discouraged by how many things there are to do and see? So You Want to Travel the World will help you divide and conquer the problems so you can get more of your travel goals accomplished. The cover photo was one I took in Venice, Italy in December, 2011.

This book will be in both digital and print. Pricing will depend upon final size, so I’m waiting to announce that.

Deep Pacific will chronicle our journey from San Francisco to Valparaiso, Chile to Easter Island, Pitcairn, Moorea, Tahiti, Bora Bora, and finally back to San Francisco. The cover photo is one I took on Easter Island.

This is also a digital-only member of the “travel diary” series. Price will be $2.99.

For more titles coming out later in the year, see my home page.