Outside the Comfort Zone

I’ve been asked a number of times why I travel the way I do, and why I make a point of going to so many different places.
Do I have favorite places to go back to? Of course. Hawaii, Ireland, London (and the UK generally), Venice, Istanbul — those are among my favorite places.
In general, though, I’d rather go somewhere new. By new, I mean a country I haven’t been to. I have a list of countries sorted by minimum time it’d take to get there.
Why?
Because I discovered that I was sticking to countries that felt too safe, too secure.
At some point, I found out about the Traveler’s Century Club: to join, you have to visit 100, but their list is quite liberal. For the last 10 years, I’ve kept track of my progress, and I discovered that I really needed to get outside of my comfort zone if I wanted to visit 100 countries.
What I’ve discovered is that the world is not as intimidating a place as I’d thought. Somewhere between 50 and 75 countries (I’m now at 88), I lost a lot of fear about travel. I’m no longer quite as uncomfortable walking around in a country where I can’t read the script system and I only know a few phrases in the local language.
Some countries I’ve visited completely cold: I didn’t research El Salvador before visiting, except for the obligatory bits (checking to see what the safe kinds of local foods are and booking a place to stay). Imagine my surprise when I realized that the country’s currency was the US Dollar.
Some I’ve overprepared for: I actually planned a trip to Australia over a period of months. When it fell through, it took me years to actually want to go to Australia again because I felt like I’d already been there.
Every new place brings its challenges, but what I really love are the unexpected moments that challenge your assumptions about the world: making the faux-pas in another English-speaking country because the language usage is different; having a broken conversation because neither of you understand each other very well, leading to some great comedy; seeing some amazing treasures of art and architecture that you can’t see where you’re from; seeing how other people’s cultures differ.
Everyone has their own way of getting outside their comfort zone. Some people like it, some don’t. I think it’s an essential practice. Otherwise, over time, your comfort zone tends to get smaller and smaller. 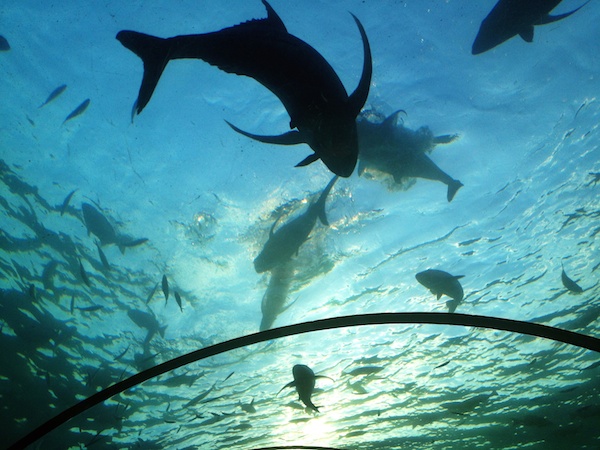 Outside my comfort zone is dining underwater. I love the ocean, but there’s always a fear because large bodies of water can also be lethal. The photo above was taken at Ithaa restaurant (the world’s first underwater restaurant) in the Maldives.
A few of the things I’ve done in the last two years: