So a friend of mine asked me what my theory was about the disappearance of flight MH 370.
Honestly, I think it’s sunk, but that’s not a very interesting answer, is it?
So let’s assume the far more interesting answer of: it’s hijacked. First question: where?
Let’s look at the Washington Post’s map.
From there, let’s exclude:

So unless they went scuba diving in Palau, that leaves two large collections of landmasses:

Both have an amazing assortment of ethnicities, politics, languages (the Philippine father of a friend used to have to speak to relatives in English because they didn’t speak the same language). Yet, I can’t think of a reason to hijack a plane and take it to the Philippines. I admit this is a failing in my geopolitical education, so let’s just move along.
I was a big fan of Indonesia for this all along. Let’s just say that Indonesia and I got off to a rocky start. Then, when I was still feeling unhappy about it, I read Patrick Lynch’s book Carriers. Which I loved because durian. And because hemorrhagic outbreaks in Indonesia, and if you know me like you know Seanan McGuire, you know I love that shit too. And then there were the hemorrhagic outbreaks because durian. Awesome.
Around 10 years ago, I worked as a Network Geographer. I loved the research aspects of it. Where in the world is this IP address? I loved that, if latency was small, you could use millilightseconds to determine real distances.
One of the tasks of interest to a three-letter agency (I did not work for the gov’t) was the mapping of Schlumberger, which does oilfield-related stuff around the world. All of their IP addresses went through their headquarters in Texas. However, they provided a lot of information about end host names. Sometimes these were people’s workstations, and some research on the Schlumberger spouse’s association might provide a clue.
Then the idea was to map to the nearest city, which meant one of a population 10,000 or greater. Which, frankly, doesn’t map particularly well when you’re talking a company where a lot of its IP space was on oil rigs, because oil rigs are often pretty far from cities. I remember spending a particularly frustrating period trying to map oil rig IP spaces in Indonesia, previously unaware how many of them were actually quite far from any population centre. So I’d be working with one map in one window and Google maps in another, and a list of cities in that part of Indonesia in a third, trying to make sense of it all.
I was, however, surprised at how many of these otherwise sparsely-populated places had significant air strips.
Which is why my crackpot theory of choice involves oil rigs in Indonesia.
As for the rest, well, that’s an implementation detail.
On Indonesia, I visited again last year, and this time we had a far more pleasant interaction despite the pouring rain.
Maldivian Air Taxi Safety Card: 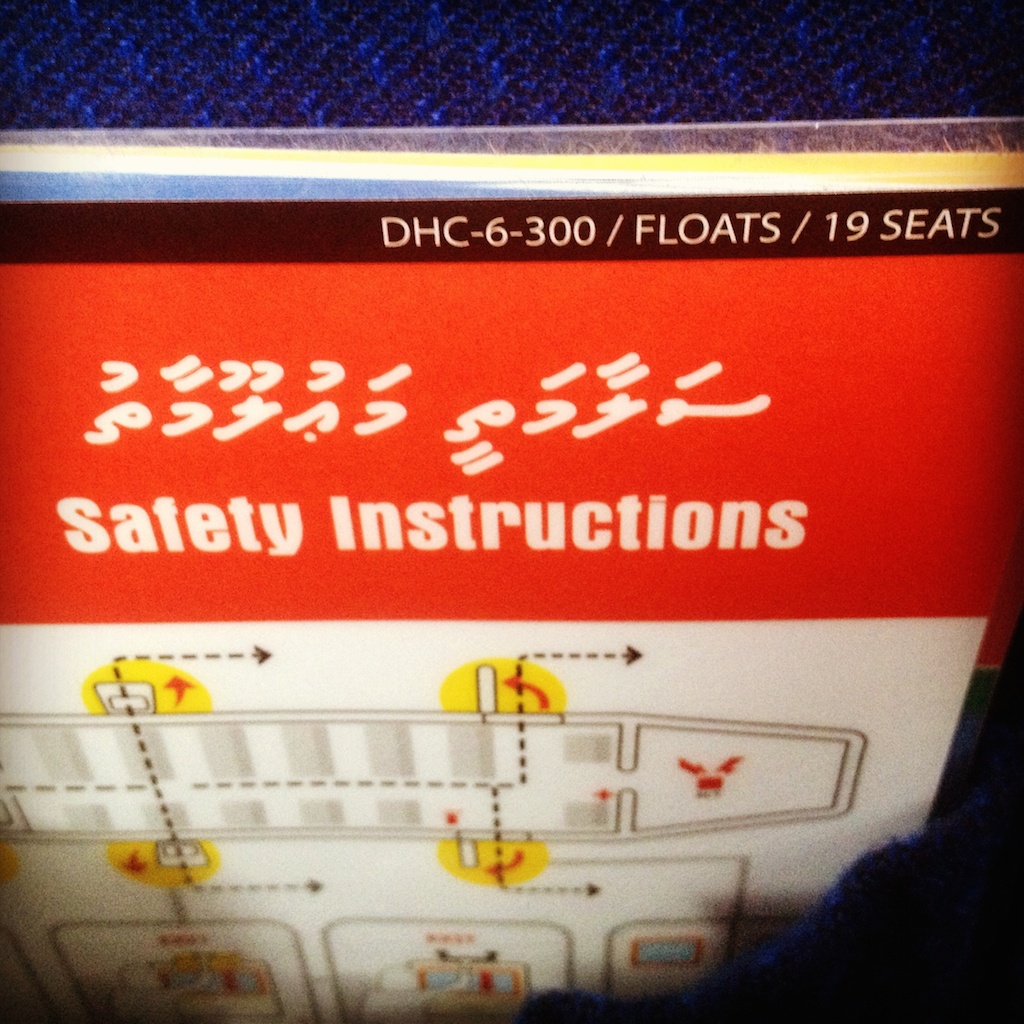