On February 7th, @pubnt faxed a letter to the judge in the Ellora’s Cave vs. Dear Author case. Courtney Milan has a long blog post about it, so I thought I’d take a different tack on the issue.

On October 4, 2014, Tina Engler, writing as Jaid Black, posted a blog entry titled _To the Silenced Victims_, about how Ellora’s Cave’s authors and supporters were purportedly afraid to speak up.
On October 8, Ellora’s Cave tweeted a thank you to STGRB: 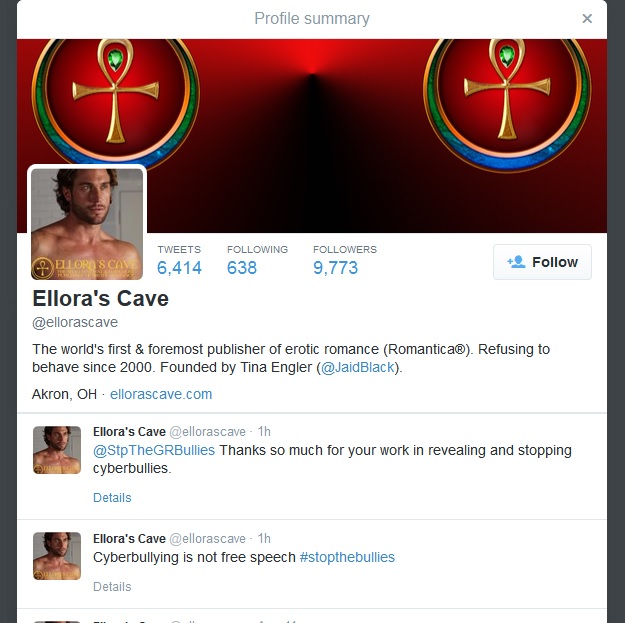 (Thank you to azteclady, and several others, for screencaps.)
Before those two tweets, Ellora’s Cave hadn’t tweeted at all since August 11—nearly two months—not even promotional tweets for its new titles. I called out Jaid Black/Tina Engler on this:

For those who don’t know, the short version of StGRB is that it is not an anti-bullying group, but is a group of authors who bullied reviewers because of reviews the authors didn’t like. In other words, it’s ironically named.
Giving a one-star review to a book you genuinely didn’t like isn’t bullying.
I stated that the biggest problem with Ellora’s Cave’s tweets wasn’t so much the STGRB mention as failing to promote EC’s authors and books. I mean, it’s a Twitter account for a publisher that had new books published during those two months of radio silence. EC fixed that promotional shortcoming, and has remained focused on prompt tweeting of new releases, pretty much (I noticed a short blip, but didn’t record when, and I’m not interested in looking it up).
Oh, and also, Ellora’s Cave deleted one of those two tweets, the one that invoked STGRB. Why bother with this digression? Please hold….

What’s interesting about @pubnt’s tweets from the October 4th creation of the account until February 1 is that there are zero tweets for: “STGRB”, “goodreads”, “bully”, or “bullies”.
And yet, in her letter to the court, @pubnt relies heavily on STGRB rhetoric. Also, STGRB are in fact the only links in @pubnt’s letter.
What amuses me the most of all about @pubnt’s letter is the assertion that @pubnt is presenting evidence. STGRB isn’t evidence, it’s hearsay. Of course, if that’s how strongly TE feels about STGRB, she could have seen to it that the principal STGRBers were on EC’s witness list. But Ellora’s Cave didn’t choose to add said writers to their initial disclosures.
As a general rule, anything said by anyone outside the list of people who make formal statements admitted into evidence or who are witnesses in the case—that’s hearsay as far as the case is concerned.
Remember the pocket universe episode of Star Trek: The Next Generation? Legal cases are kind of like that. Apart from the witnesses and people giving testimony (and the law including case law, of course), the world outside is invisible. Or, more accurately, hearsay, with some notable exceptions.
Invoking some random blog, even this one, is neither evidence nor proof.

I’d like to refute the generalizations @pubnt makes about #notchilled regulars, at least as they pertain to me.

The Ellora’s Cave Author Exodus Support Thread is located here. Many EC authors have books out from other publishers. The purpose of the support thread is to help give those authors willing to speak out some visibility.

An earlier version of this post was supposed to be published over the weekend. Apparently several posts I thought I’d scheduled didn’t post. Oops.