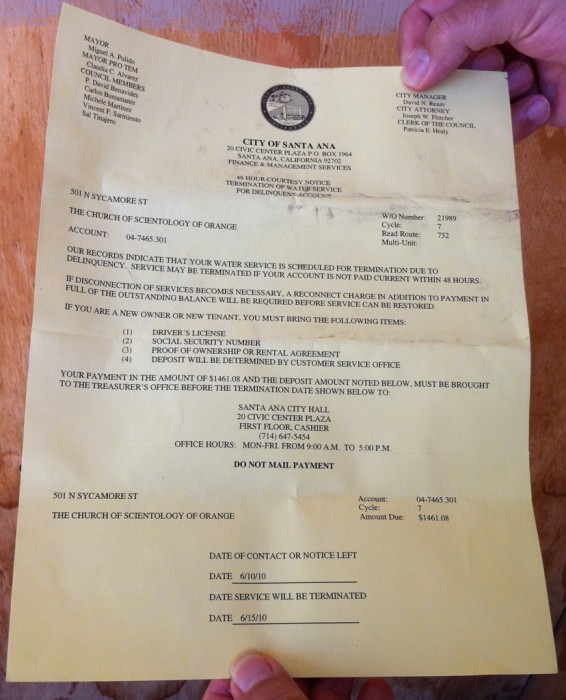 In 1979 and 1980, I worked at the Church of Scientology, Mission of Orange County in Tustin. I worked in Treasury. My primary role was Director of Income, which isn’t as interesting as it sounds. I left because, frankly, I was going broke quickly. I felt bad about leaving and returned in January 1984 on a 5-year contract. It had recently increased its status from Mission to Org. I worked there through most of 1989. Like before, I worked in Treasury, both as Director of Income and later as Deputy Treasury Secretary.
This post came about because of this tweet:

#Scientology will expand, continue to help thousands around the globe in #GoingClear & will never lose their tax exempt status in the USA.

You see, I know Edwin Dearborn. In the late 80s, he was in charge of the “field staff members,” which is basically the affiliate program for Scientology. His job was getting people to bring other people in and paying them their commissions.
Director of Income (my job) consisted of a bunch of things including:

Let’s talk numbers. In 1979 and 1980, a good week was $10,000 and a more average week was $7,000. We had thirty staff at the time. Scientology policy says that 30% of the week’s budget (and yes, budgeting is done weekly) is used to pay the staff. In cash. Around then, the average staff member made $70 per week. The mission had about $450,000 in savings and a paid-off mortgage on its building.
By 1984, there were quite a few more staff—about double—and the average weekly income had risen to around $20,000-30,000. When I returned, there were almost no savings, and the building had a mortgage. After the 1982 Mission Holders’ Conference, a lot of the “wealthy” mission coffers were raided. In addition, the mission had been seized from Ray and Pam Kemp, who’d sued and had gotten paid back. Hence the mortgage.
Average staff pay at the newly-minted church was ~$110. I remember the first hundred-thousand dollar week. Because the org was growing a lot, eventually the average week became $250,000. At that point, we had consistently 200-250 staff and had to rent significant space at the building across the street. Average staff pay ran around $150. If you note, the numbers don’t add up for a couple of reasons: 1) the budget sum excluded book and e-meter sales (which had their own budgeting), and we had a much higher percentage than in earlier days; 2) we got a lot of refund requests and bounced checks (more the latter than the former), frequently in excess of $50,000.
I’m told that for many orgs, including Orange County, the peak Scientology money expansion was in 1988-1992, though the peak expansion in number of Scientology students was far earlier—in the late 60s to mid-70s.
The big game at the time was to make all organizations “Saint Hill Size,” supposedly the pinnacle where we’d all get paid living wages, yada yada yada. (I’m not the first—nor the last—to be taken in by a long con.) Orange County, along with Stevens Creek and Los Angeles, achieved this in the late 80s.

Scientology Funding Changes Since The 80s

L. Ron Hubbard did not believe in donations. He didn’t believe in fundraisers. In fact, he had rather scathing words to say on the subject:

SOLVE IT WITH SCIENTOLOGY
[Excerpt from HCO Policy Letter of 24 February 1964
Urgent-Org Programming]
If the Org slumps: Don’t engage in “fund raising” or “selling postcards” or borrowing money.
Just make more income with Scientology.
It’s a sign of very poor management to seek extraordinary solutions for finance outside Scientology. It has always failed.
For Orgs as for pcs “Solve It With Scientology”.
Every time I myself have sought to solve finance or personnel in other ways than Scientology I have lost out. So I can tell you from experience that Org solvency lies in More Scientology, not patented conibs, or fund raising Barbecues.

And, in practice, you never saw fundraising.

L. Ron Hubbard didn’t care about how impressive buildings were. He cared whether the org was making it, he didn’t like debt, he didn’t like fundraising. For all his faults, he thought Scientology should sink or swim on its own merits.

We own a tremendous amount of property. We own a tremendous amount of material, and so forth. And it keeps growing. But that’s not important.
When buildings get important to us, for God’s sake, some of you born revolutionists, will you please blow up central headquarters. If someone had put some H.E. [high explosives] under the Vatican long ago, Catholicism might still be going.
Don’t get interested in real estate. Don’t get interested in the masses of buildings, because that’s not important.
Tape: The Genus of Scientology
Anatomy of the Human Mind Congress
31 December 1960

The first attempts at an Ideal Org strategy—by which I mean putting Scientology in a vastly nicer building came in the late 80s, only a couple of years after L. Ron Hubbard died.
Big impressive buildings would become Scientology’s icons. Rumor has it that this was at the behest of Tom Cruise, who purportedly told David Miscavige, Scientology’s leader, that a lot of orgs looked ratty (which was true). Regardless of the real reason, there came to be huge, and nearly endless, fundraising campaigns.
Like so. 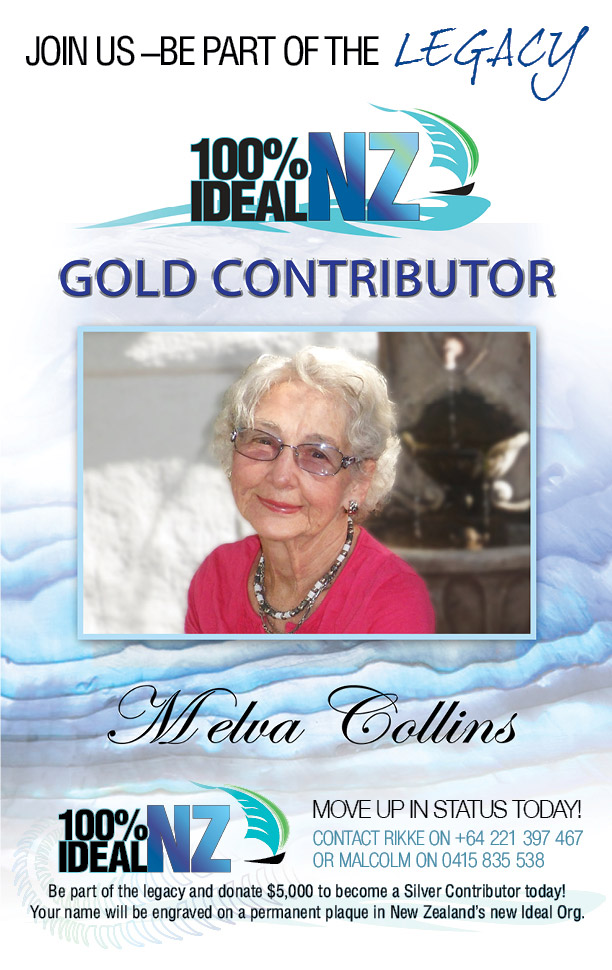 (Source: Tony Ortega)
When I was in, there was simply no way that you would ever pay $5,000 for status. Heck, even the International Association of Scientologists was only $300 per year back then. Before that, there were no formal memberships; it was free.

So How Well Have Scientology’s Expansion Plans Worked?

Remember Edwin Dearborn? He’s now selling himself as a marketer. In 2010, my friend Mark and I visited Orange County Org for the first time in many years. My goal? To find out whether or not I’d been declared a suppressive person. Oh, and the lulz.
Edwin was then the organization’s head and came to say hello. He was also working part-time in marketing at that point.
Yet, his marketing skill was such that he couldn’t save his own organization, who’d supposedly had a metric ton of money raised for a new building, from having a disconnect notice for the water bill tucked into the side of the building (photo up top).
Here are other photos I took that day.
We drove in during the busiest part of Scientology’s week, but the parking lot looks unmaintained. The vehicles all seemed to be staff; neither of us saw anyone who seemed to be public (parishioners). 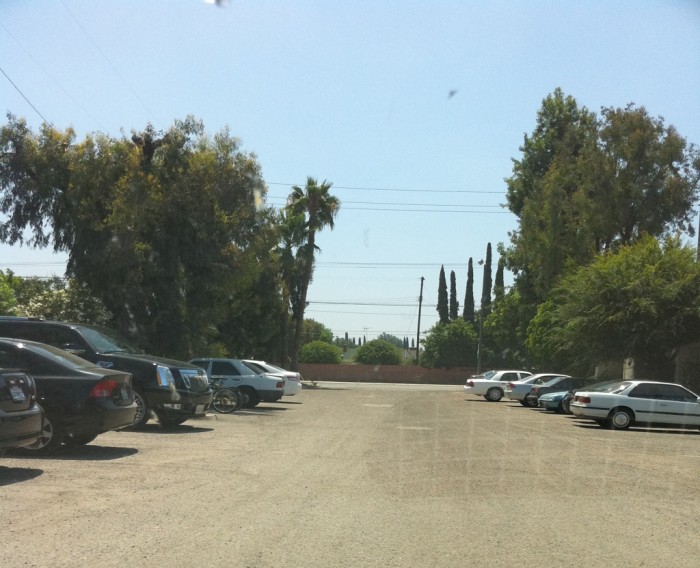 Some parking places are marked off for “humanitarians,” by which Scientology means people with big wallets. Srsly. 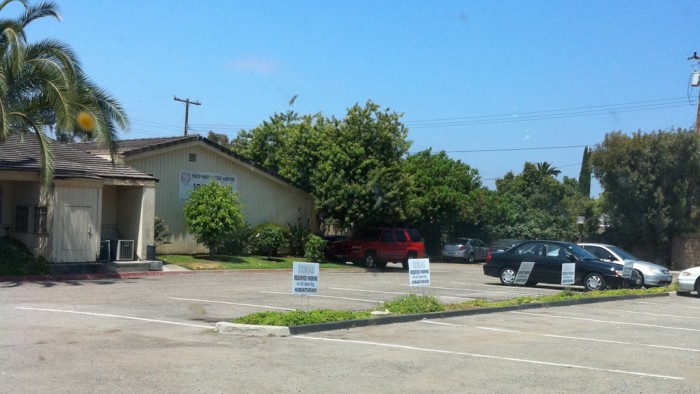 And here’s the way back of the parking lot. Check this out. 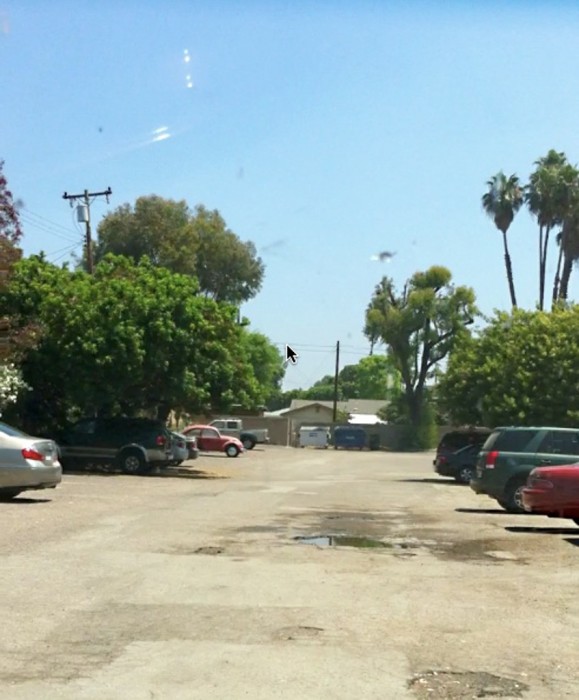 That sure looks like massive expansion…of potholes.
What hit me the hardest in talking to all the overly earnest staff members was that each and every one of them—including people I’d known twenty to thirty years before—held one of the core Scientology beliefs: that Scientology was expanding. Even when, to their very own eyes, the evidence was there to the contrary.
Mark and I just were kind of dumbstruck by the whole concept. It’s fairly obvious to me that that no longer looks like an organization with 200-250 staff, let alone the public to go with.
Then we went to the “new” location, which has since become their new “ideal” org, where Mark found the disconnect notice. In fact, you can see the entire parking lot in this picture. 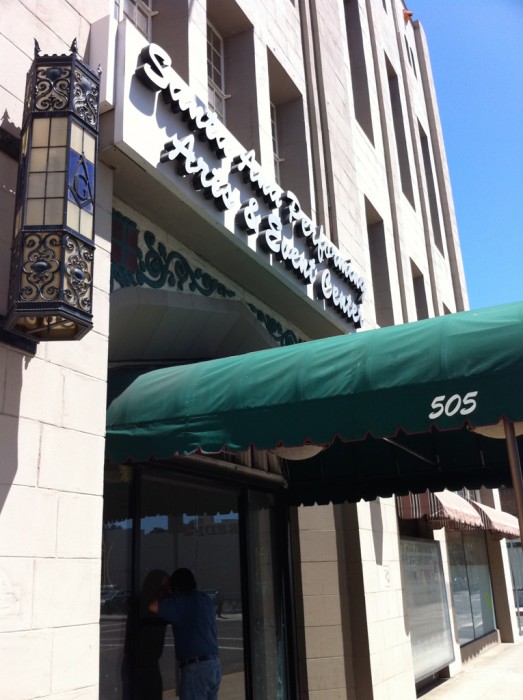 Because there is no parking lot. It’s just enough outside downtown Santa Ana that it also gets no foot traffic.

I’m going to quote the Scientologese to you, then translate.

Im pressing charges against a scientologist who molested my daughter when I was a staff member. He is still in scientology with his wife and other family on staff, so the church’s Dir I&R, (kylie Roe) decided that since I was no longer a scientologist, they would not be interviewing him.
The ED, Ed Dearborn then requested I be comm-ev’d from post for allowing his only introductory auditor to moonlight.

So, by reporting that her daughter was being molested by another staff member, Scientology decided that Maggie was no longer a Scientologist, and therefore there was no need to interview the molester. The OC Church’s head, Edwin Dearborn, wanted to bring Scientology justice actions against Maggie to remove her from her job.
Remove the person reporting and, voila, there’s no more problem.

Scientology Beliefs: That they Will Become Saint Hill Size

Remember how I said Orange County became a Saint Hill Size organization in the late 80s? 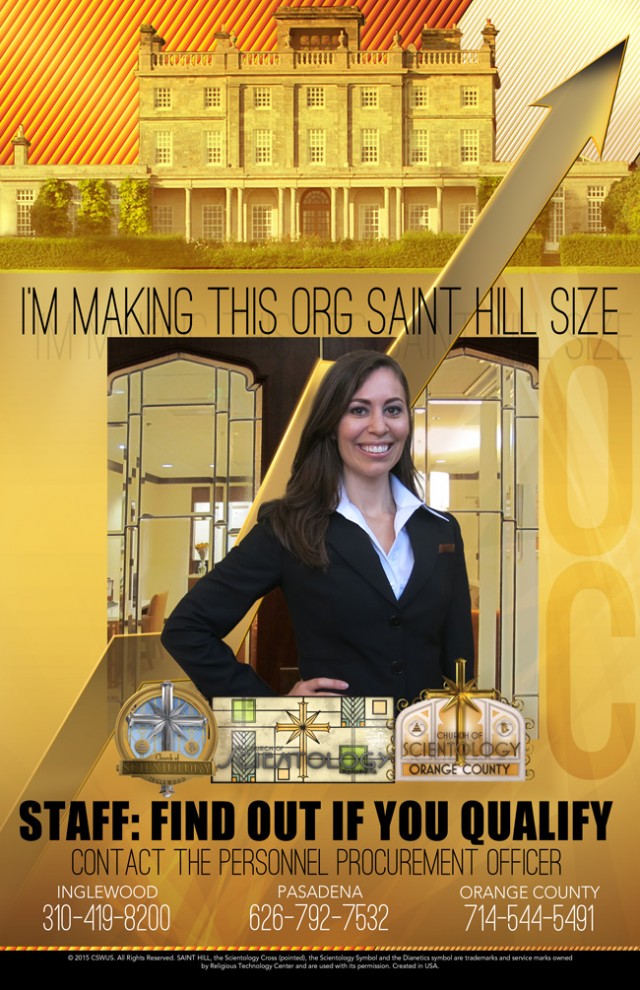 They have apparently (and conveniently) forgotten they did this already, back in the 90’s […].

So typical of Kool Aid drinkers. They have selective memory.

Despite Rinder’s comments, OC really was big, we had blocks of parking problems, especially at night, and we had a lot of public coming in. I don’t know what LA Org was actually doing, but Rinder says they were falsifying stats. If OC was, it definitely wasn’t the quantity of money stats, because I did some of those audits.
Now, there were, as I said, a lot of bounced checks and refunds, and I thought there were a lot of badly handled financial situations, including trying to make special payment arrangements through third parties, as apparently happened here. There may well have been falsified statistics in various areas, but the amount of money deposited, to the best of my knowledge, matched the reported income.
Still, how can an organization shrink 75% (my estimate) and staff who’ve been there all along don’t notice? I just can’t even.
As Susan Garbanzo said on Twitter, “PR helps only when a co. is really ready to open up. Else it’s just room freshener.”
Scientology “expansion”? Is just room freshener.

Xenu Is My Homeboy. Available from Redbubble in a bunch of sizes and styles, including a hoodie. Thanks to Deana for the idea. 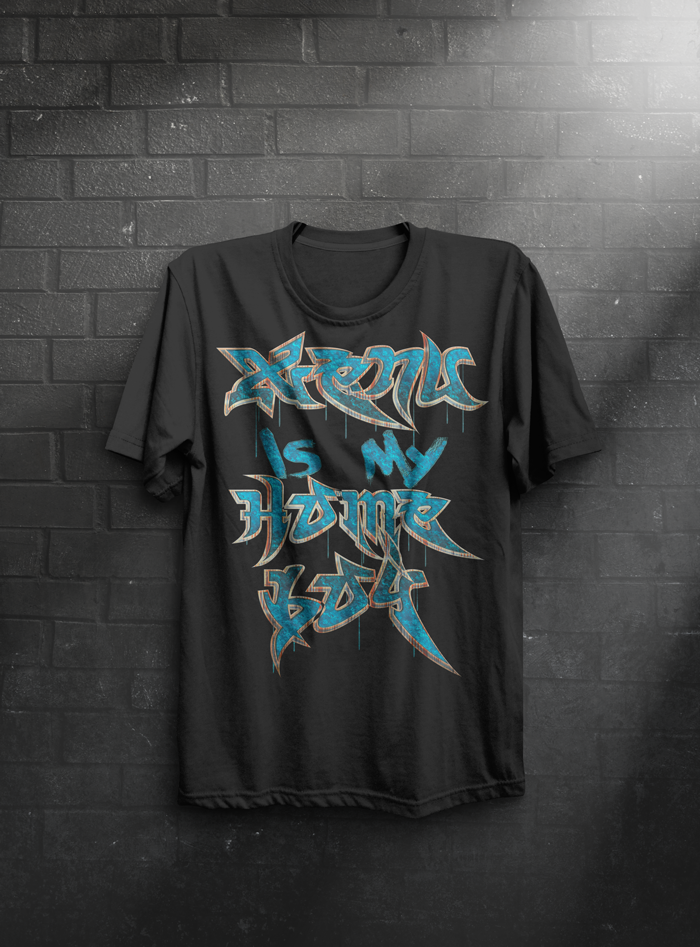