I’m writing this from the United Club at Cleveland Airport.
Those of you who know me might ask, “Cleveland? You? Srsly?”
Well, gentle readers, here is my tale.
Over on Flyertalk, Shannon Kelly (aka UAInsider) announced that the last Continental flight ever would be Friday night, March 2, 2012 at 11:59 pm, flight CO 1267 from Phoenix to Cleveland. I’m one of those good sports who says things like, “I’ve never been there,” so I thought, why not.
Himself was less amused by the prospect. I said I thought I’d go to the rock-and-roll museum, and he said, “that’s two strikes.”
My loyalty to CO goes back quite a few years; I flew them a lot in the 80s when they had routes between Orange County and San Jose. Then, suddenly, they changed so the only route out of SNA was to Denver, and I stopped flying them for a while.
Before that happened, though, I booked an award trip to Honolulu, my first trip to Hawaii, for a long weekend. The South Pacific region (which included Hawaii) Continental flight attendants went on strike while I was there, and I “had” to spend another day in Hawaii. Back then, if you had a paid ticket on an ARC-based carrier, your carrier would schedule you on the next flight out from any carrier — except, of course, for award flights. So I was stuck. Darn!
Over time, I moved and Continental didn’t really fit my itineraries again, so I stopped flying them in the early 90s in favor of US Airways. Then I moved to the bay area and flipped between US Airways (for my flights to Pittsburgh) and American. When I went to work for Classic Vacations, we sold a ton of United airfare due to great contract rates. That’s what slowly migrated me over to the United side of the force. When AA started flying less interesting itineraries from San Francisco, I found myself flying more United, even during the Ted years. (Ted, btw, was an incredibly cute name. I miss it for short haul.)
At the end of last year, I decided that United really, truly was my preferred carrier and wound up with 2P (now Premier Silver) status. Half of that was flying to Barcelona on US Airways earlier in the year.
So when I heard about this flight, I felt sad for the Continental I’d loved all those years ago, and thought it would be nice to go on the final flight. So I did.
My flight out of San Francisco departed from the International terminal. Rick and I are the same this way: we love seeing all the foreign-flagged carriers going to places I’ve not yet been. My first plane sighting was the Air New Zealand flight leaving out of Gate 93 to Auckland (where I have been), the 747 so huge that it had its nose almost pressed to the glass (so it could fit in the allotted parking space), looking like an over-eager child.
Gate 91, which shares the same seating area, was where my rather smaller Airbus was waiting patiently. The flight was uneventful, except that my seatmate was apparently upgraded when his wife was not, so she snuck forward to have part of his drink.
When I arrived in Phoenix, I didn’t see the rest of the Flyertalkers/Milepointers right away. There were four of us traveling: Steve64, a local; Seth aka sbm12 aka Wandering Aramean; violist, and myself; plus a non-traveling local, fenx. WA had chocolate bags to hand out, and I handed some out as well (without the cool labels), and WA got one of the Continental signs they took down. He also got his picture taken with the captain, and was the last person to board a Continental flight.
I had planned to sleep during the flight, but they had free DirecTV (for everyone, not just first class) and I watched Contagion instead. The cold chicken plate had pasta on the side, so I ate the chicken only. I really wish they still had special meals in domestic first class. Sigh.
We arrived at around 5:15 in the morning. Despite this being the last Continental flight to depart, it was not the last to land; that would be a flight from Narita (Tokyo) to Houston, which got a water cannon salute upon arrival. As we arrived while it was still dark (not to mention threatening to snow), a water cannon salute would have been less pragmatic. Still, there were photos to be had, announcements made, and much sadness over the final days of a legacy airline dating back to 1934.
The four of us shuffled off to the United Club for drinks and a light breakfast, then the other three people departed for their flights out of Cleveland. Me, I’d decided to spend a day here.
The Hilton Garden Inn breakfast was about what one would expect. I had planned to go to the rock-and-roll museum, but my legs were cramping (sometime medication side effect) and I was tired, so I just took long baths and slept until the legs felt better.
When I’d been researching how to spend a day, I watched Bourdain’s No Reservations episode about Cleveland, and discovered Lola Bistro. I don’t follow celebrity chefs much, so I didn’t know how famous he was, but I managed to snag a reservation and go. I had the Chilled Lobster Salad, the Scallops in Bacon Broth, and blueberry-lemon sorbet. It was an astonishingly good meal, and I’d be happy to spend a week in Cleveland if I could eat there every night.
I’m off for my return flight!
[ 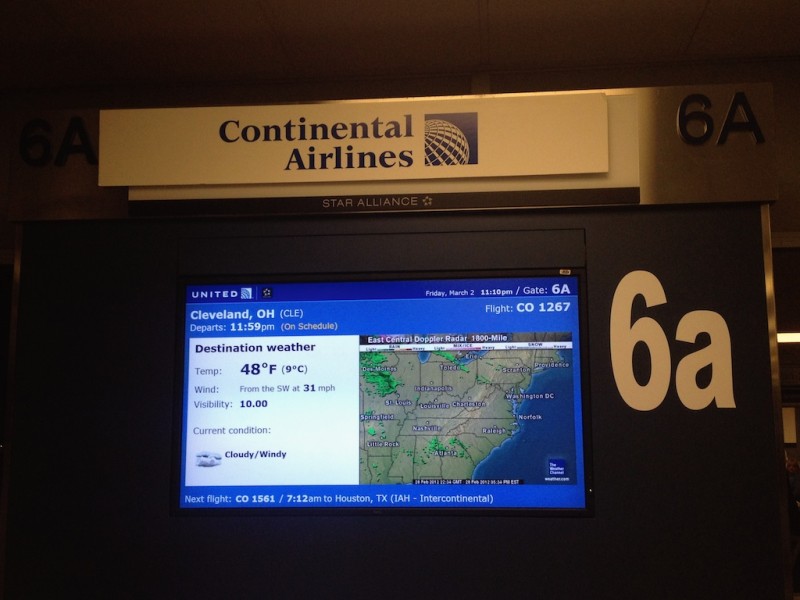 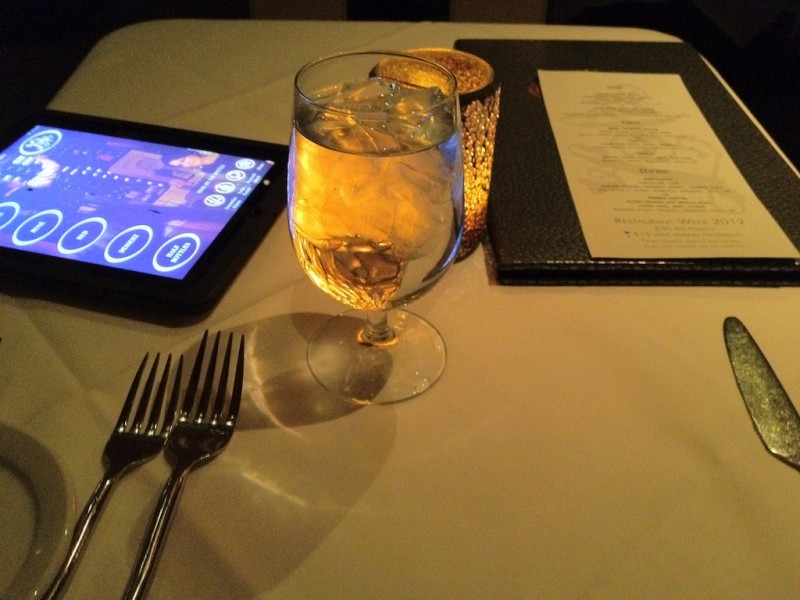 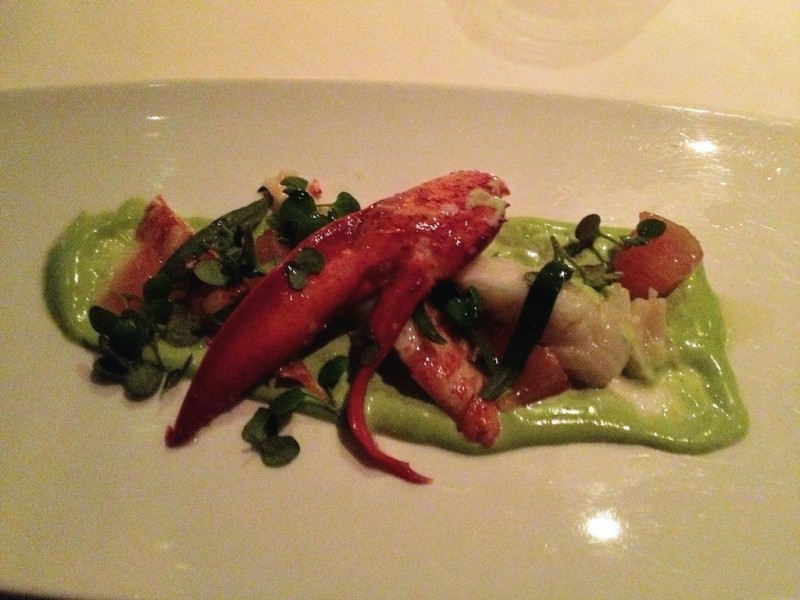 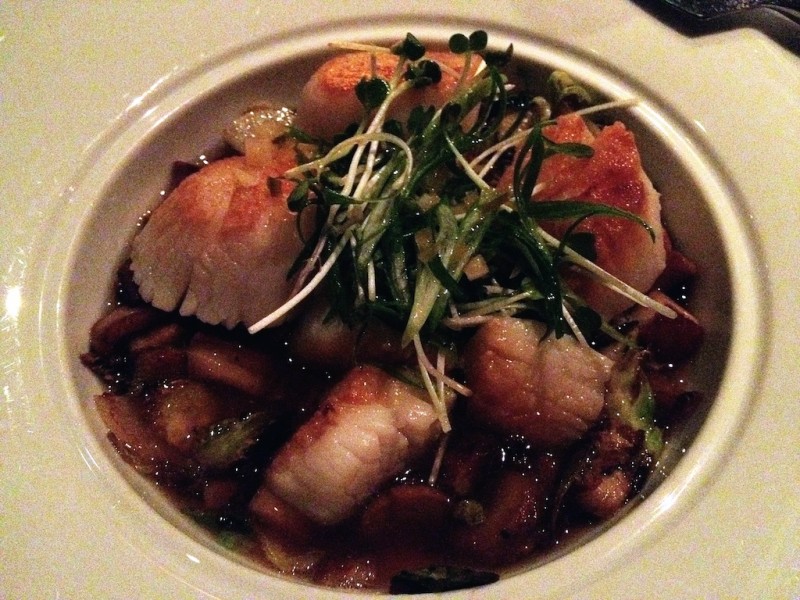 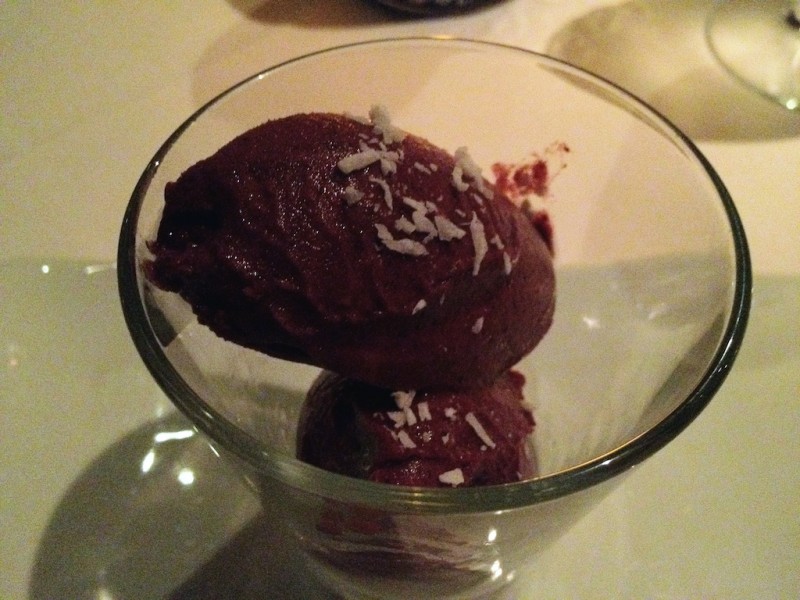