Note: I later changed the rule below due to the Amazon/Hachette tiff, putting Orbit books first.
Essentially, my policy is one Rick uses for other things: make it easy for me to help you. Orbit isn’t.
John Scalzi discusses Orbit’s decision to only include previews of their three nominees here.
This year’s kind of rare—I spent my year reading out of genre and have read exactly zero of the nominated novels.
My usual rule for book-length works is:
If it’s not in the Hugo Voter’s Packet, I don’t vote for it.
This year, I need to modify that:
If it’s not in the Hugo Voter’s Packet in complete form, I don’t vote for it.
Why? Because not providing a nominated book says to me that the Hugo Awards aren’t perceived as valuable by the publisher. Why should I reward that?
Meanwhile, this weekend attendees at RT Booklovers Convention in New Orleans are getting a thumb drive with 349 books. Self-published books, granted, but who has more to lose (or gain) than they do? (I have one of those, fwiw, Felt Tips: Office Supply Erotica, edited by Tiffany Reisz.)
There are a few modifiers to my rules:

If I read a book in a Hugo packet and I love the book, I will buy it if I hadn’t already. So, in that sense, being nominated already means I’m more likely to a) read the book and b) buy the book than any other random book published last year.
I no longer read print books, and not being a Kindle person, I don’t do ebook library loans.
In general, there are 1-2 Hugo-shortlisted novels per year that I’d buy. Stross wrote my favorite book, and the nominated book is the third in a series (and I haven’t read the first two in that series). Ann Leckie’s been getting a lot of buzz, I just hadn’t gotten around to buying and reading her book yet. And I’m so far behind on Mira Grant books that it’s not funny (though this one’s in a new series, so there’s that). All three are affected by Orbit’s decision not to put entire books in the packet. Here’s the joint post by the three affected Orbit authors.
I’ve already established that I’ll be putting Larry dead last. (Edit: to clarify, I mean in reading order. Since I haven’t yet read his book, I’m not sure where I’d rank it on the ballot, but I can say it’s unlikely I’ll get to it during the voting period.) Why? I don’t mind hearing people say, “I liked this, it’s eligible, I think you could check it out,” but I think that putting together a slate crosses the line. (This is aside from any issues of what he did or didn’t recommend.) So he goes after the whole Orbit crowd.
…which leaves…
(cue dramatic music) 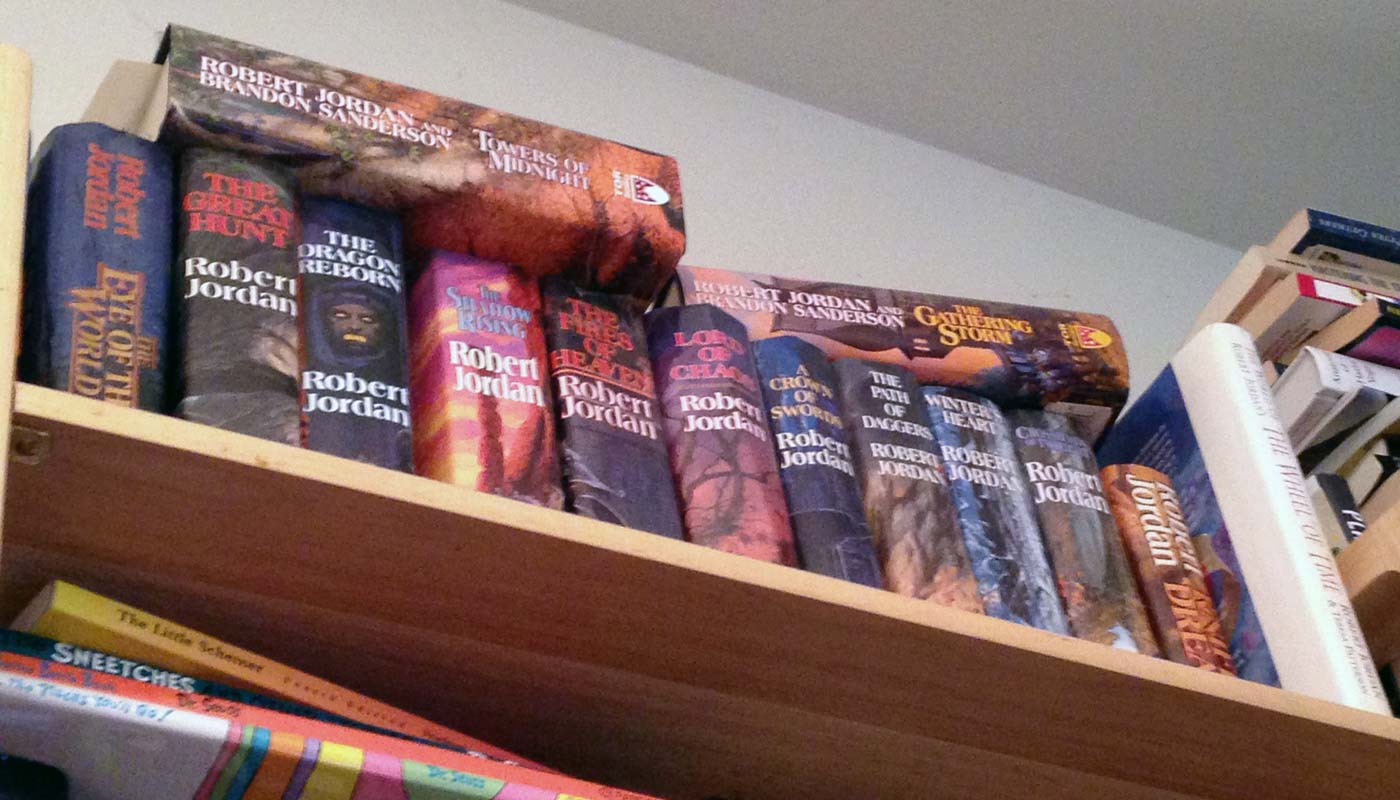 I guess I’ll go about finally reading The Wheel of Time then. (Those books on the shelf? Rick’s. I almost never read incomplete series.)
Tentative reading order, possibly to be modified later:

If Orbit provided full books, my reading order would likely be:

I was asked on LJ what the problems were with PDF:

Total pain in the ass.
I honestly can’t get into a book that takes that much attention just to read. I’ve tried before, and not voted before. The last time I tried was a Cat Valente nominee (Palimpsest).
No more.