The Importance of Books and the MZB Timeline

Responding to this comment about the timeline on the MetaFilter thread about MZB’s abuse and Breen’s case.
More correct timeline:

I’ll promote a paragraph from one of my comments into this post:
Many of us have been through some really dark times, and we have the pieces that spoke to our hearts that got us through those times. It genuinely gives me no joy to know that, for those whom MZB’s works were those pieces, I’ve dislodged that for them.
And I’ll add:
In addition to the lives she harmed, MZB’s works saved the lives of other people by speaking to them when other works and other people would not and/or did not.
Truly.
Rachel E. Holmen, who worked as an editor for Marion Zimmer Bradley’s Fantasy Magazine said about Marion:

When she visited cons, ten or twenty young women an hour would stop by with stories along the lines of “Your books saved my life.”

There are other writers being published now who may speak to those same hearts, but if MZB is still the author that would help them, then I think it’s important that her work be available to do so. This doesn’t diminish her very real (and very severe) failings.
Rachel’s quote points out why we need diverse books by diverse writers that speak to diverse audiences.
Additionally, MZB gave a start to a lot of women writers—a higher percentage than anyone else in the genre at the time. Those writers helped pave the way for even more female voices in the genre.
Including me.
“A Sword Called Rhonda” was in fact a parody of Mercedes Lackey’s works (specifically, Rhonda was a parody of Need), and Lackey was first published by MZB.
I think the Carl Sagan quote about books is a great way to end this. 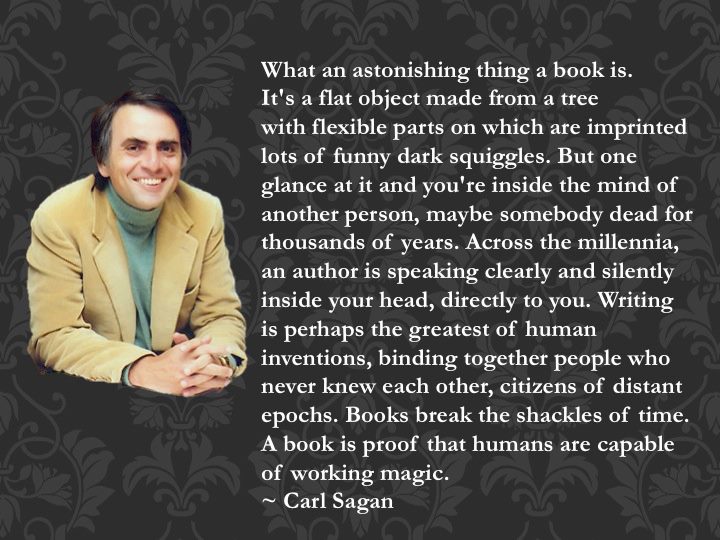 See also: Paul St John Mackintosh’s article, “More on Marion Zimmer Bradley and the ethics of artists”, which takes a more intellectual approach.
Janni Lee Simner discusses what she and her husband did with the royalties they’d earned from sales to Marion’s anthologies. Thoughtful.