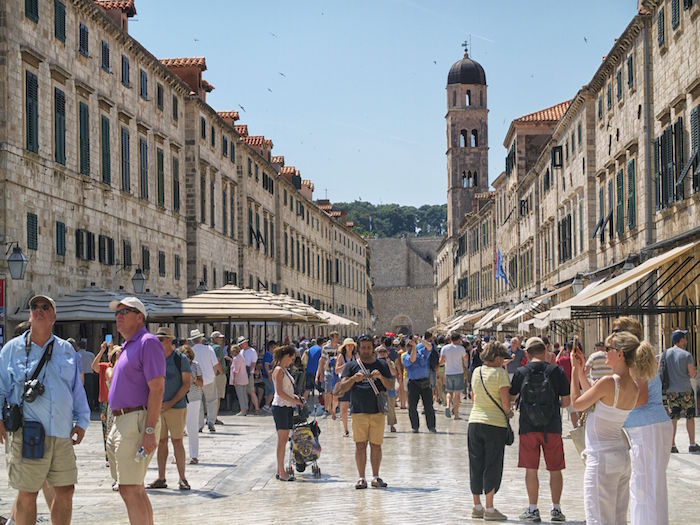 You can usually tell the difference between Rick photos and Deirdre photos: mine only rarely have people in them. In fact, it’s hard for me to remember to actually take photos of Rick or myself. Or anyone.
I’m just so conditioned to waiting for that people-free shot, which means I usually don’t have photos of the whole of a tourist monument; my shots typically start above peoples’ heads.
Why? Partly for the reason in this photo: a lot of the photos of people in touristy locations wind up being very meta. I’m quite charmed with the meta nature of this one, though.
Despite the fact that it was a brutally hot day, magnified by the stones soaking up the hot sun, it was super-great to finally have the chance to walk around Dubrovnik. In the early 80s, I had a French teacher from Yugoslavia who waxed poetic about the place (she herself was from Belgrade, which is now in Serbia). I’ve wanted to go ever since, so more than thirty years.
At the time Rick took this photo, I was sitting in a shady spot behind on the right. It was still a billion degrees out.