Not a surprise that Ellora’s Cave lost their motion, but I was hoping for more of a judicial smackdown.
Since it’s been two months, here’s the summary. After Ellora’s Cave/Jasmine Jade filed against Dear Author/Jane Litte in Ohio state court (EC/JJ being in Ohio; DA/JL in Iowa), defense filed to remove the case to federal court. EC/JJ filed a remand motion at the end October, and it’s just been ruled upon today.
Five-page ruling here. I’ve also updated the copy of the federal court documents I have on Dropbox.

The Case Management Conference Scheduling Order specifies that Plaintiffs must make a settlement demand two weeks prior, and Defendants must make an offer one week later.

At least fourteen (14) days prior to meeting with the Court, Plaintiff(s) shall have made a demand with a written description and monetary breakdown of the damages claimed, and no later than seven (7) days thereafter, Defendant(s) shall have responded with an offer. This is to be included in the Parties’ Planning Meeting Report.

Obviously, I don’t expect this to result in an actual settlement unless EC/JJ folds.

Then the Case Management Conference

Main discovery is stayed until after the Case Management Conference on January 26th.
That’s not a meeting that’s public, but this particular judge has very specific instructions for the CMC. From the CMC Scheduling Order:

From his Judicial Preferences Page:

Judge Adams is of the view that the Case Management Conference is of extraordinary importance. He expects counsel to be prepared with the factual predicate from the standpoint of counsel’s client. Judge Adams expects the client to be present; where the client is a corporate entity, he expects a person to be present who has the greatest knowledge of the relevant facts. This is probably NOT in-house counsel. Judge Adams tailors the Case Management Plan based on the information supplied at the CMC by counsel and parties.

Given those two quoted paragraphs, I can’t see how both Tina Engler (as settlement authority based on her majority ownership and the subject of one of the claims) and Patricia Marks (as EC’s CEO of record) can avoid being there. Also, obviously, Jane Litte needs to be there.

How’s This for Irony? 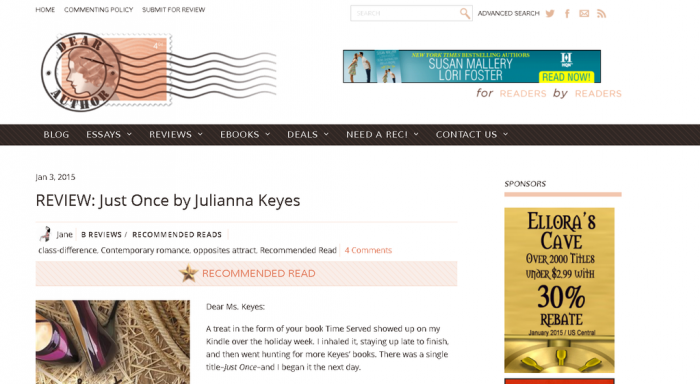 Lest you think this is old, the blog post is dated January 3, 2015.
What does this mean?

Note: I’ll link to Courtney Milan’s promised post about the remand decision once it’s up.