Getting Past the Attack Narrative 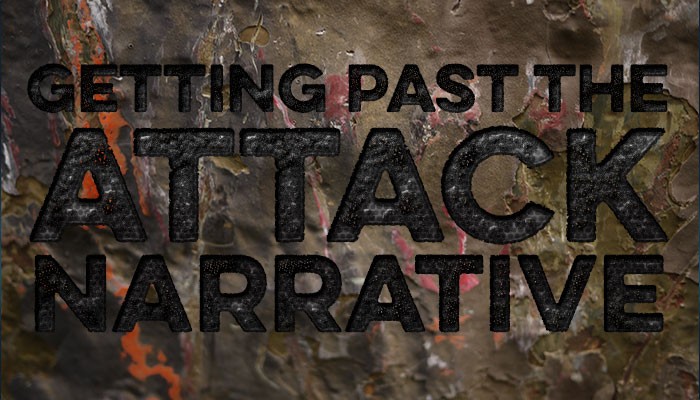 When does something become an “attack” online?
Serious question.
Let’s say that two people, Jane and Cait, are both authors.
Jane says something that involves Cait, only she uses a word incorrectly. Cait responds that, hey, that word used that way and applied to me in that context is offensive. And Cait’s right.
Why is Cait then accused of “attacking” Jane?
After all, these are words, the tools of both of their craft. Is not their increased understanding of them in both of their interests?
Wouldn’t one typically expect Jane to apologize for using a word incorrectly and hurting Cait’s feelings by doing so?

Let’s take a more complex variant of the above.
Sarah hears Jane say something that involves Cait, using a word incorrectly. Sarah understands it to mean the common meaning of the word. She writes about it, but doesn’t name Jane.
Ken reads Sarah’s comment, then says something about it where Cait hears. Cait responds that, hey, that word used that way and applied to me in that context is offensive. And Cait’s right.
Then Sarah says I wrote that, and the person who said it is Jane. While Sarah misunderstood part of what happened, what she did not misunderstand was the word.
And there’s a huge pile-on, in the middle of which Jane reveals that she hadn’t used the word the way Sarah, Cait, and Ken understood it to be used (i.e., the way it is commonly used), and that Jane was using the word in a non-standard way.

Yet, were it not for what Jane said, and others’ over-reading of the intended meaning because of Jane’s misuse of the word, none of this would have happened.
Substitute names as appropriate, and you have the skeletal structure of what happened 1-2 days ago.

When you use the word “attack,” you absolve yourself and the people you see as your allies of apologizing or behaving well.
I’m considering removing anyone who uses the word in a non-physical sense from all my social media. I’ve been guilty of this in the past, too, and I know it’s a hard habit to break.
Instead, try to consider what actually happened in that moment without characterizing it, either to yourself or to others, as an attack.

Often I see “attack” used for criticizing the content of what someone said as opposed to criticizing the person.
I totally get how it can be hard to separate the two, especially when it happens to you. Been there, made that mistake. However, it’s one I’d expect writers to be, on average, less likely to make given the prevalence of Clarion-style critiquing.

I incorporate by reference this brilliant post from Jim C. Hines.
If I have information that will clarify a situation, regardless of whether or not I like the person it helps and also regardless of what it will cost me in so-called friends, I will bring it up. Principles before personalities. (Am I perfect at this? No, of course not. I also don’t seek things out, so I can and do miss such opportunities.)
Also, if I’m in contact with you, there is something I admire about you. I’ve been friendly with very contradictory sets of people, and I’m able to accept that everyone’s a mix of good and bad—and hold that complexity in my head.
If you’re one of my contacts, I don’t expect you to like everyone else. I don’t expect you to understand what I see in other people.

“Attack” used this way also carries the connotation of “unprovoked.”
If, instead, we look at the events above as a misunderstanding and clarification, rather than an “attack,” we can learn from it.
You know, build a community rather than destroy it.
Just a thought.

The header image background is a photo I took of the battering surface of an M60 Patton tank. It seemed an appropriate choice.