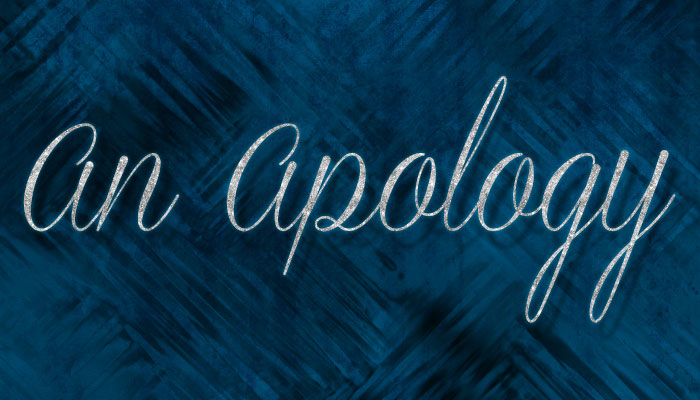 tl;dr: A comment I made 2-1/2 weeks ago got tweeted, escalated, and lots of feelings were hurt. As two people have made statements about my motiviations, this post is about context from my perspective as well as apologies for my part.

After the Hugo Awards nominations were announced (Eastercon was one of the announcing conventions), I got a lift back to my hotel, then wrote The Puppy-Free Hugo Award Voter’s Guide. By the time I woke up on the 5th, it had received about two thousand hits.

I heard on Twitter that there was going to be a panel on the Sad Puppies and they were assembling people for that panel, so I asked in program ops if I could be on the panel.
For context: I first worked convention programming for ConJosé, the 2002 Worldcon, where I was staff for the late Kathryn Daugherty. I was her programming 2nd for the following year’s BayCon, then went on to be the programming head for BayCon for two years. Since then, I’ve worked as programming staff (of various kinds) at the local, regional (Westercon), and Worldcon level, most recently as co-head of programming for last year’s Westercon in Salt Lake City.
I say this so that you will know that I very much know what it’s like to be a) the person who makes the decisions about panels, and b) the person who has to deliver news to people, and c) the minion who is neither the bearer or decider of news.
I was fine with any answer as to whether or not I could be on the panel. I did not try to push my way onto the panel, nor is it sour grapes, and I am not sore about not getting onto the panel. I have no sense of entitlement about these things. I thought I had interesting things to say, but, hey, I also have a blog.
When I arrived in program ops Sunday afternoon, I was asked if I wanted to wait or come back. What you may not know if you’re new here: I’m mobility impaired (I need two knee replacements and have severe arthritis of the lower spine), and suffer from both debilitating fibromyalgia and myofascial pain. My pain is worst when I’ve either a) slept poorly, or b) am jetlagged—and I’d taken a ten-hour flight to get to the con. I was in miserable shape, so I decided to stay because walking anywhere would hurt. I worked for a while in the room, talked a bit with someone about the Ellora’s Cave situation (and found a new Loose Id author to read), and then Rick and Mike Willmoth showed up and we went to dinner. I was told by program ops staff to check back before the panel.
Which I did. As the panel time approached, I had actually left program ops, then I was asked to return to be told that no, the panel was going to focus on how the current Hugo situation affected the British professional scene. I thanked the programming person. Paraphrase of what I said: “Panels have a point of view, and it’s clear the one you’ve chosen isn’t one I’d be a fit for, and I’m fine with that.” He double-checked with me and I assured him that I was.
But it’s worth noting that I didn’t have any answer until about exactly when the panel was starting.
Then I went to the panel, which had already started, and Rick gave up his seat for me and stood with the SRO part of the crowd.
I did not livetweet during the panel (which I had the night before; the Hugo Award nominees were announced in the same room) because I was running low on power on all my devices.

And now we get to the moment that went viral.
Specifically, what went viral yesterday was reaction to this comment I made on April 13th:

Where things begin to bug me is the amount of toxicity currently being directed at Bee, such as the awkwardly uncomfortable part of the Sad Puppies panel at Eastercon, where it was suggested that someone write Vox Day/Requires Hate slash.

Here is the only account I have found tweeted during the panel:

You’ll note they are very different, and one of the reasons I delayed writing this post until this morning after things blew up late last night was that Rick had already gone to sleep and I wanted to ask his memory of what was said before writing this post. Not because I disbelieve Ms. Sperring’s account (which I’ll get to in a minute), but because I know for a fact that what I mean to say and what I actually say aren’t always the same thing. Plus, my own memory is not infallible.
The two phrases that specifically stuck with me are: “Vox Day Requires Hate slash” and “Give it to me, Voxy!” [edited to add note: the latter phrase is not in the same context, see James Worrad’s comment below] and the subject matter was Vox Day being a fan of Requires Hate. I somehow missed that this was an already written fic. Ms. Sperring says the content was entirely non-sexual, and I have no reason to disbelieve her, but she did use the word “slash” and that does imply relationship and/or sexual content in fic (my interpretation at the time was that it was at least suggestive, if not actually sexual). I’m a fanfic writer, though, and I am used to more concise terms.
I can understand why Ms. Sriduankaew, who is a lesbian, would see sexualized fiction of her and Vox Day to be rape fic, and I have to admit that I hadn’t really thought that far ahead in part because I didn’t think the “slash” in question existed yet.
To be clear, I never assumed that Ms. Sperring was/would be the writer of said fic. I’m thankful that Ms. Sperring, Ms. Sriduankaew, and I agree that rape fic isn’t something we’d write, and something we agree is appalling.

It doesn’t fit popular theories about Ms. Sriduangkaew abusing others, I know, but the actual fact is that neither I nor she knew until yesterday. Neither I nor Ms. Sriduangkaew started this escalation; Shaun did. Otherwise, it’d have been an obscure footnote on a post.

@shaunduke I don’t know what I can say further, to be honest. I’ve never met Deirdre so I don’t know anything about how she may think.

So, thank you, USians who do not know me, for your judgments. I hope you are never similarly judged by strangers.

It would be nice to be extended the same courtesy about my motivations.

My Apology to Kari Sperring

My Apology to Benjanun Sriduankaew

This was a comment I made on my blog, and you should not have heard it from someone else first.

This post on Asymptotic Binary, as it covers the timeline differently.
Edited to add: I used Ms. Sperring and asymbina’s post pointed out something I had not known (having missed the panelist introductions): she’s Dr. Sperring. I mean no disrespect by referring to her as Ms. Sperring. My usage comes from my father, a Ph.D. in Particle Physics from Cal Tech, who took his usage from Richard Feynman after teaching Feynman’s course on Physics to freshmen when my dad was a graduate student. Mr. Feynman did not like people using Dr. as a title. 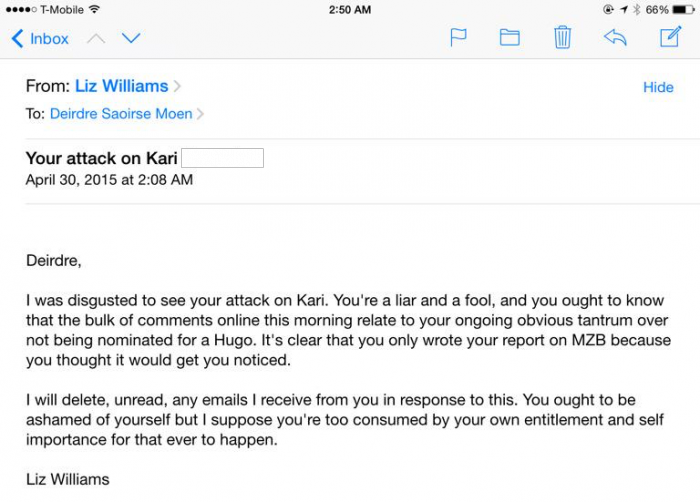 Liz, you are an astonishingly loyal friend, and that can be a very good trait to have. I’m sad that you think so little of me that you sent this without asking me what happened, especially given your email to me on March 5th containing this line:

In fact, I actually didn’t expect any notice of any kind when I wrote the pieces on Marion Zimmer Bradley last year. I rather expected to be ousted from quite a few circles, frankly.
First, I forgive your outburst, and I’m sorry for my part of what clearly led to your stress.
You know what, though? I helped Marion Zimmer Bradley’s daughter, Moira Greyland, stop being afraid of her own shadow after being molested by her mother. I gave her a place to have a voice, to speak publicly for the first time, for both her and I to help people speak out on an important topic—and that is worth more than a trophy any time.