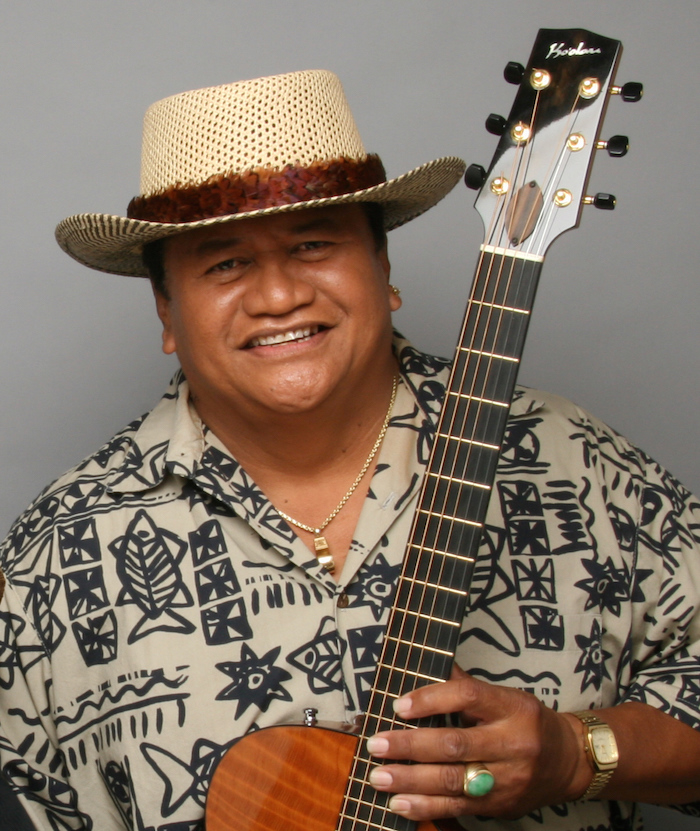 I’ve decided to turn my love of world music into a regular Friday feature, with Ledward Ka’apana being my first. In general, I’ll be featuring a few videos or songs from each performer, and, for vocals, I’ll emphasize performers who do not sing primarily in English. The other aspect is that this will be popular music in various genres.
I remember back when I worked at Classic Vacations on the Hawai’i desk being thrilled that I finally was able to use my love of Hawai’i in my day job. I went to a local Hawai’ian store, Sun Jose Hawaii (sadly now closed), and went to their music room.

Even though most of the wording was in English, and I knew some Hawai’ian, I might as well have stepped into a music shop on another planet. I had no idea who any of these people were, and no idea how to find what I was looking for.
There was an instrumental section, and in that section, there was an album of Slack Key Guitar Masters, offering a smorgasboard of amazing artists. I picked up both volume 1 and 2. Out of all of those songs, I really fell for “Radio Hula” by Ledward Ka’apana. The following is a medley of it with another song (“Yellow Ginger Lei”):

One of the other songs I’ve liked Led’s performance of is Whee Ha Swing:

While Led’s primarily known as a slack key guitar master, he’s also a very accomplished ukelele player. In this video, he’s showing off one of his custom ukeleles, and it’s a beauty.

At the end, you hear him laugh, which brings me to the next topic….

I’ve been really blessed to be able to see Led live a few times. If you ever have the chance, I highly recommend it. He laughs a lot, and clearly has a great deal of fun at his job, which is always marvelous to see. One time, his daughter danced hula for a couple of songs, and that was wonderful.
The other reason to see him is that he often performs with another slack key guitar artist, Mike Ka’awa. Mike is unique in that he plays 12-string slack key guitar. Here’s a picture of the two of them. 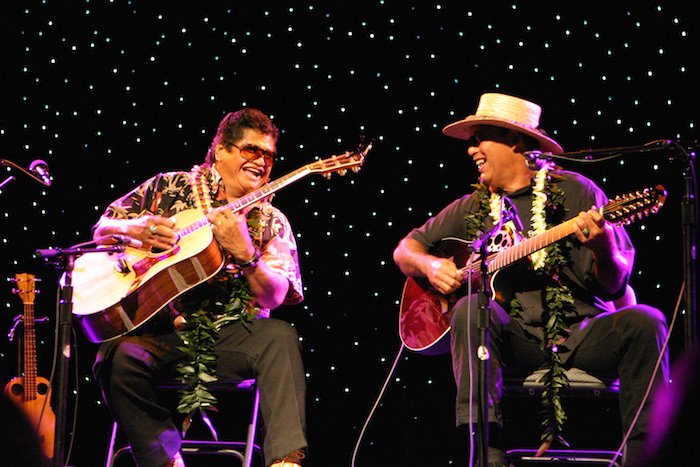 And, while I’m at it, here’s Mike performing one of my favorite songs, with Ledward Ka’apana on ukelele (including a uke solo). Sorry, I can’t embed that one because embedding’s disabled.
But, here’s another of the two of them performing No Ke Ano Ahiahi, which is my favorite of Mike Kaawa’s songs (though I prefer the studio version):

What Is Slack Key Guitar?

I’ve known it was Hawai’ian my whole life, but I didn’t really realize how much it identified with private expressions of cultural heritage. These following two pull quotes are from this Wikipedia article on slack key guitar:

Slack-key guitar is a fingerstyle genre of guitar music that originated in Hawaii. Its name refers to its characteristic open tunings: the English term is a translation of the Hawaiian kī hōʻalu, which means “loosen the [tuning] key”. Most slack-key tunings can be achieved by starting with a guitar in standard tuning and detuning or “slacking” one or more of the strings until the six strings form a single chord, frequently G major.

I’d known that the guitar came along with Mexican cowboys during the early rancher days in the late 19th century, and that Hawai’ian cowboys are called paniolos.

The music did not develop a mainland audience during the Hawaiian music craze of the early 20th century, during which Hawaiian music came to be identified outside of Islands with the steel guitar and the ʻukulele. Slack key remained private and family entertainment, and it was not even recorded until 1946-47, when Gabby Pahinui cut a series of records that brought the tradition into public view.

It’s the second reason, combined with the fact that slack key didn’t really get mainstream penetration until the 1970s, that led to my not having grown up with slack key guitar. Despite the fact that I took hula lessons and heard a lot of Hawai’ian music, it was mostly of the Don Ho “Pearly Shells” variety (though, as with many recordings of that era, often the white cover artists got more airplay, as Burl Ives did with Pearly Shells).
I’d love to hear some of those amazing players who never got recorded. Sigh. On the flip side, this means that a great deal of slack key guitar music that’s been recorded is still available.

We’re in Hawai’i. Years ago (I think in 2011?), we paid for an NCL cruise around the Hawai’ian islands, and it had gotten to the “use it or lose it” time. So, here we are, about to board tomorrow.

Are you a slack key fan? If so, who are some of your favorite artists?