Taken at the Hawai’ian Tropical Botanical Garden, just north of Hilo, on my trip last year. 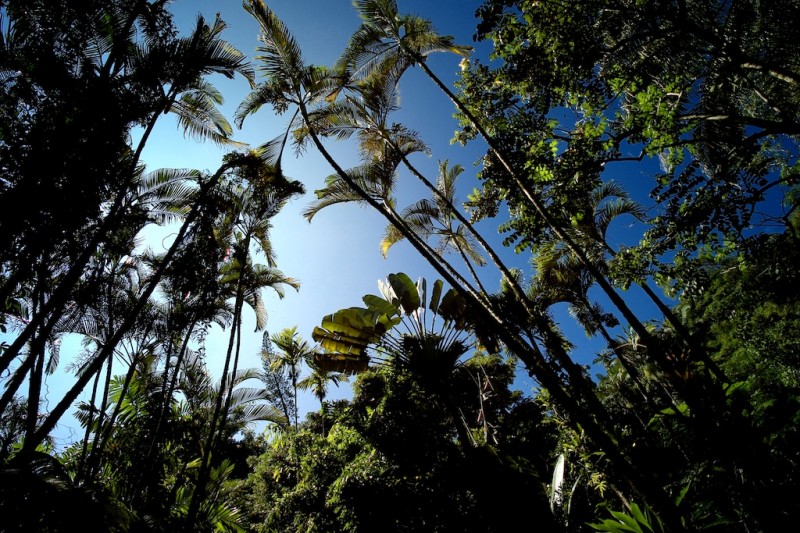 You know, I never should say anything like I don’t want to join a cult in jest like I did here, because the universe is a perverse place.
I’d narrowed down my luggage choices to four, and I’d have been happy with at least three of them.
I went and looked at spinners and fell for Tumi’s smaller international-sized carryon. Yes, it’s larger than I wanted. Yes, it’s hard-sided, but it’ll be useful for larger planes and stuff. But, more importantly, there were two other factors: I thought it had better corner crush support than its competitors, and I found it on sale.
I wasn’t super-crazy about any of the colors, but, hey, at least they have colors. So I picked the “breast cancer awareness” pink multi. 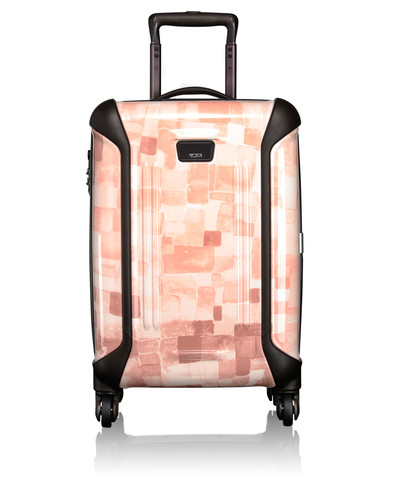 Back when the web was born, links were underlined. Many early browsers (e.g., lynx) were text only, and many people didn’t have color monitors, or had monitors that were severely limited in palettes (like 16 colors), so the convention of underlines stayed.
However, an underlined link isn’t as legible as one that isn’t underlined.
For those of you who want some thoughts about alternatives, here’s a few:
1) Make the color different than surrounding un-linked text, and add a change of color when the text is hovered over or active. E.g.:
a {text-decoration: none}
a:link {color: #ff9900}
a:active, a:hover {color: #ff0000} /* change from orange to red */
2) add a more delicate border when hovered over, e.g.:
a {text-decoration: none}
a:link {color: #ff9900}
a:active, a:hover {border: bottom: thin dotted #ff9900} /* add border when hovering */
3) add some fancy schmancy effect when hovering. Right now, on deirdre.net, I change the text color and add a text-shadow effect:
a{color:#00437f; text-decoration:none}
a:hover{color: #002444; text-decoration:none; border-bottom: none; text-shadow: #00598d 0 0 4px}
Just be clear and give sufficient contrast that people understand a) it’s a link, and b) when the link is hovered over or active.
You can see a live example here.

Article’s here.
“And failing to address the still everyday use of the word “gay” as a playground insult is also inexcusable. Those who do eventually realise that they’re gay find that the word which describes them has been used – unchallenged – as a proxy for anything that’s useless or rubbish for half their childhoods. There’s now firm evidence of the damage it does to young people’s self-esteem.”

A Cranky Request for Luggage Recommendations

I know some of you travel a lot, and I’m looking for a new piece of big luggage to replace my falling-apart one. Plus, hey, bad shoulder and I really felt that 46.6 lb bag I pushed around the airport (it was full of books from World Fantasy)
I’m looking for:

Anyone have specific recommendations?
I’m also looking for a rolling carry-on, and I’m even more specific there. I currently have a Travelpro Crew 6 rolling tote that’s 16 x 13 x 7. It began falling apart almost immediately, but I have been stoically carrying it for four years, even though the handle screws are falling out. Frankly, I love the form factor, but not the product. Unfortunately, it’s an odd and great size: it exactly fits in the overhead of smaller commuter planes. I like not being the bin hog, y’know?
When Travelpro went to their newer lines, they screwed up what little I did like about the bag.
So, I’m looking for:

I’ve normally been a Travelpro person or a Ricardo of Beverly Hills person, but I’m not really someone who has strong brand preferences here. I don’t really want to join the Tumi cult.

November 5 (as in Guy Fawkes Day) is Bank Transfer Day, a movement to take funds out of banks that received bailouts and move it to either independent local banks or credit unions (I favor the latter as credit unions are non-profit organizations).
Sadly, though I’ve known about it for a week or two, I haven’t yet gotten my act together on this, so I’ll be taking care of the move over a couple of weeks.
Many credit unions now have big-bank features like online bill pay, etc.
This site will help you find a credit union.
One of the coolest features of credit unions? You can deposit and withdraw from CUs that aren’t yours if you get one that’s an affiliate with the CU Service Center Network. Many 7-Eleven stores and all Co-op network locations have free ATMs.
Many have one “loophole” way to join if you’re not otherwise eligible. For example, Stanford Federal Credit Union lets you join if you’re a member of Friends of the Palo Alto Library (membership costs $15), and (last I checked), they would open your account and add the membership at the same time. While I’ve kept up my membership in FPAL (it’s the next town over for me, after all), it’s not necessary to do so.
Hope this helps!

Sunday Morning I gave my reading and about a half-dozen people came. Some of them I didn’t even know. For a 10 a.m. Sunday morning reading, this is successful, as even established authors have difficulty filling a room at most conventions.
After my reading was Peter S. Beagle‘s, so I stayed to listen. He’d been the Writer Guest of Honor at BayCon two years ago, but I hadn’t seen his reading then. He read a new piece he hadn’t read before. Below’s a photo I took with my iPhone 4S and edited in-phone with Snapseed. (Aside: best photo app for mobile that I’ve bought.)
I hadn’t bought banquet tickets, and hunger forced me to forage for food elsewhere. Naturally, the closest restaurants were closed, so it took me quite a while (sore from Saturday morning’s fall) to get across the hotel property to get to Charlie’s. I’m sad I missed the awards: Peter S. Beagle got a lifetime achievement award. One of my Clarion instructors, Karen Joy Fowler, won for best collection. Nnedi Okorafor won for best novel, and has a tweet about where she happened to be at the time.
My trip home wasn’t remarkable except that Prime Time shuttle completely failed to pick me up within the stated time period and I took Super Shuttle to the airport instead.

I was originally scheduled to come to San Diego on Saturday morning so I could go to a work-related event on Friday, but, well, I had an opportunity for yet another medical appointment, so that took precedence and I flew down Thursday morning.
Getting to the bottom of my medical stuff has been something of a nightmare and has been a multi-year process of peeling the onion. In short, the celiac disease seems to have triggered other stuff, and now I think we’re getting to the last and possibly most critical bit.
Many years ago, I was given a diagnosis of fibromyalgia without excluding other diseases, and fibro’s supposed to be a diagnosis of last resort after everything else is ruled out — and nothing was. I do mean nothing.
For several years, treating it as though it were fibro was enough, but for the last few years, it has not been, and it’s been getting worse.
The good news? I think I finally figured it out. I could be wrong, but I’ve done a lot of reading lately, and I don’t think I am.
So, I found a doctor that agrees with me (thus my earlier trip), but isn’t “in plan,” so it’s more of an advisory role, and there are serious concerns about treating the issue (which I knew). On the other hand, it’s possible that I could get full remission in a few days.
I also got some work done, though I was limited by my doctor schedule and travel logistics.
The event I was coming for is, of course, World Fantasy. So last night I had the opportunity to participate in the mass signing, and I met a local writer who also happens to be a co-worker, so I introduced him to the other sf/f writer co-worker I know. I got Neil Gaiman’s autographs for a friend, too.
Today was my first full con day, and I went to the SFWA meeting at (oh my God) 8 a.m., which went well. As I was leaving, I was just out of it enough that I thought to myself, “Oh, I’m moving well now that the drugs kicked in.” Not five seconds later, I didn’t see that there was a step and took a rather nasty tumble, and I’ve been very sore since. A very sweet African-American teen here for another event helped me up and wanted to know if I was okay.
Because of the pain from the fall, I missed a lot of stuff, and spent the con sitting and talking to people for longer periods and not moving around so much (perfectly understandable). It remains to be seen how well I’ll be feeling the next two days, when the soreness from a fall is generally at its worst. Fortunately, I don’t think I hurt anything seriously.
I have a reading at 10 a.m., and I am now thinking everything I’ve written is crap, and I’m feeling the pressure; I’m reading right before someone I’ve always looked up to and it’s intimidating. I am not sure what I’ll read in the morning yet, but I brought seven things to pick from. I’ll probably read two or three.
I spent some of my downtime this trip reading Steve Jobs’s biograpy. I hope to finish it by Halloween, which seems fitting given the focus of the holiday for me (the annual honoring of people who’ve passed on). I’m going to write a longer post about that when I’ve finished the book. I started reading from the time of Steve’s cancer diagnosis forward, finished the book, then started again at the beginning. I think that’s actually an interesting way to read the book.
I’m going home tomorrow to a newly-repaired car. I have two follow-ups in-plan medical-wise on Tuesday, then a backup appointment on Wednesday with a different doctor. 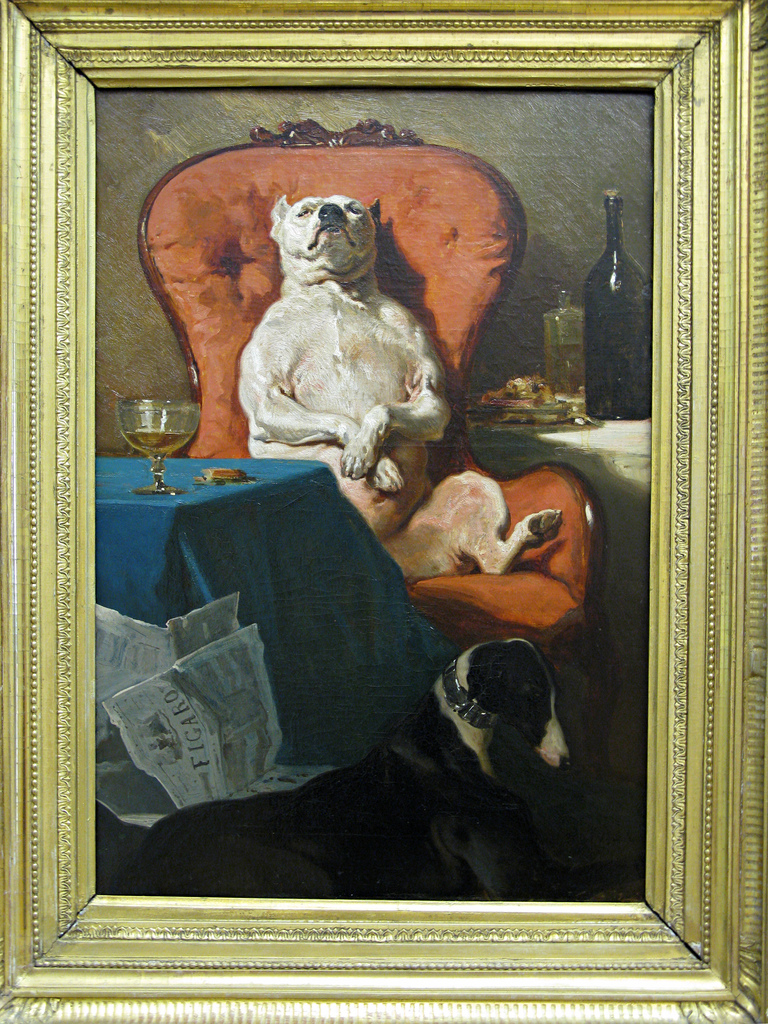 Photo taken by me at The Hermitage in St. Petersburg, 2008.

Rick and I saw the new Three Musketeers movie tonight. Unlike other versions, this one’s actually SF.
It’s not a great movie, granted, but it was an awful lot of fun. Rick opined that Dumas would have loved it.
The acting rarely rose above adequate, but Milla Jovovich was a nice surprise: her skill’s improved significantly over the years. The dialogue is best left unrated, but I really loved the look of the film, which was mostly shot in Bavaria.