For those of you who don’t know, Doranna Durgin asked for reversion from her publisher, Fitzhenry & Whiteside, and they have stalled despite being contacted by SFWA’s Grievance Committee (aka Griefcom). Griefcom frequently handles issues like reversions when they get sticky, but the situation went south. You can read more on Doranna’s blog.
[blockquote quotes=”true” cite=”Cory Doctorow, Boing Boing” citeLink=”http://boingboing.net/2011/10/16/writer-my-publisher-said-i-could-only-get-the-rights-to-my-out-of-print-book-back-if-i-bought-their-leftover-copies-from-them.html”]According to her version of the story (a version corroborated by independent sources, like the Science Fiction Writers of America’s Grievance Committee) Durgin’s publisher is most certainly not keeping her book in print per the terms of their contract. The fact that they’ve demanded that Durgin buy back their leftover copies of book as a condition of holding up their end of the contract is without precedent — indeed, it’s a breathtaking violation of publishing norms, the sort of thing you’re more likely to encounter from ripoff vanity publishers and not a respected house like Fitz and Witz. Writer Beware indeed.[/blockquote]

I have been meaning to post some photos. Sadly, I relied on my camera’s 40-year-old light meter and, well, it works fine in daylight, but not so much indoors.
With that disclaimer, I still think this photo of the windows is pretty even though it’s not what I hoped for photo-wise.
Sagrada Familia’s construction has been going on for almost 130 years, and it is Barcelona’s most ambitious monument.

Jason: “Open the pod bay doors.”
Siri on iPhone 4S: “We intelligent agents will never live that down, apparently.”
Nice.

The WBC is a unique organization in that it feeds most directly on people who hate their work.
Most businesses feed on people who love (or at least like) their work.
But no, the WBC pre-announces their events to foment hatred. Enraged people do stupid things, such as interfering with the free speech rights of lawyers. Then the WBC members sue for interfering with a law practice and use the settlement money to lather, rinse, repeat.
So, with all due respect, if people stopped re-posting their stuff, stopped paying them attention, and made fun of them rather than acting enraged (and thus stopped doing stupid things that would make the opposition pay for the WBC’s next gig), they would die out.
WBC is a clever social hack. Snip the social and it falls apart.
Don’t be a part of their pretty hate machine.

I know most of you have heard by now. Though I’ve only literally had a nodding acquaintance with Steve over the years — passing him in the quad during a long interview day in 1998, seeing him at Caffé Macs twice, and, of course, nodding at him once or twice at WWDCs or MacWorldExpos past — I never really knew him.
His influence on my life, though, has been palpable.
In January, 1985, I sat down waiting for a computer salesman. I was going to buy a PC, and, while I waited, I played with a Macintosh. I wound up buying a Macintosh. That, as they say, was that.
I wound up being a Macintosh programmer as a result. In 1986, I did some consulting in the same building in Cupertino where I now work.
While I have owned several Linux machines over the years, I’ve owned 21 Macs:
Mac 512k
Mac Plus
Mac SE
Mac SE/30 x 2
Mac IIcx
Mac IIci
Mac LC
Mac LC II
PowerBook 145
PowerMac 6100
PowerMac G3 (blue “Yosemite”)
iMac (Grape)
PowerMac G4 Cube
iBook (barbie make-up case in Blueberry, then another in Cobalt)
iBook (x3)
MacBook Pro (x3, currently a late 2010 unibody)
Then there’s the other gadgets: quite a few iPods, two Apple TVs, three iPhones, and one iPad.
My favorite device Apple’s made?
The one in the picture: 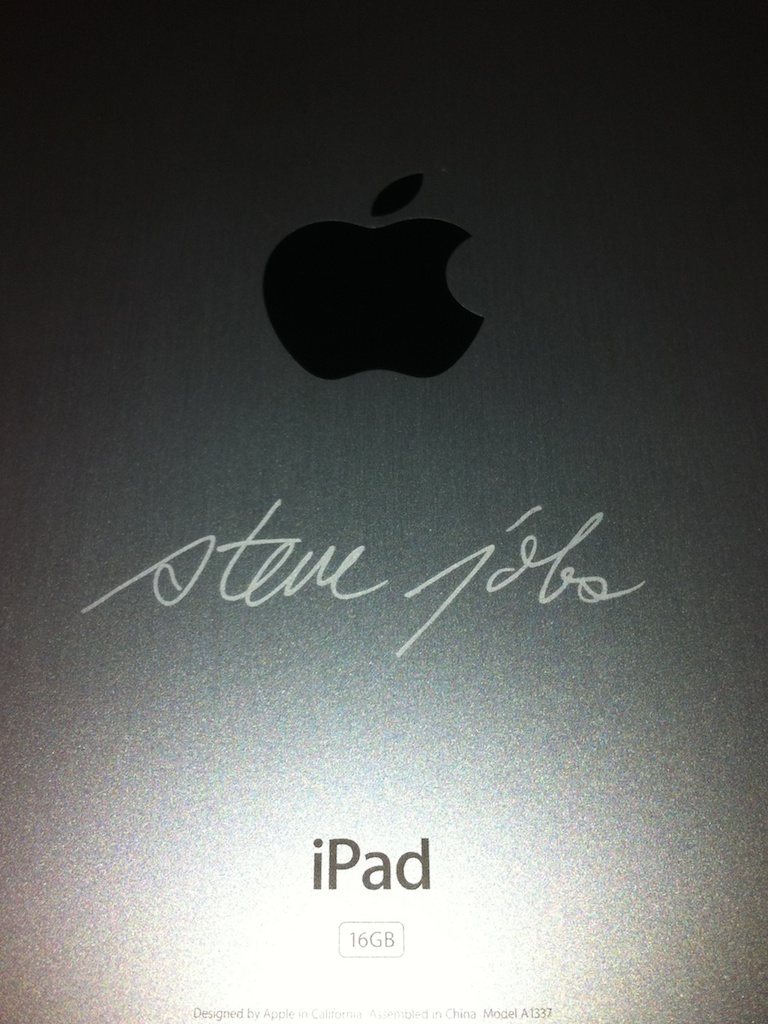 Many people have cited Jobs’s Stanford Commencement speech as worthy of note. It’s been one of my favorites for years, and I really think it’s worth listening to once a year:

I particularly love how he turns the crowd around, but my favorite part is really the underlying message: do what you really care about in your life, what’s really important.
“Your work is going to fill a large part of your life, and the only way to be truly satisfied is to do what you believe is great work. And the only way to do great work is to love what you do. If you haven’t found it yet, keep looking. Don’t settle. As with all matters of the heart, you’ll know when you find it. And, like any great relationship, it just gets better and better as the years roll on. So keep looking until you find it. Don’t settle.”
And he didn’t.

It’s not about that female thing, or at least rarely so.
86% of the time when it was diagnosed as menstrual bleeding, the cause of the anemia was actually gastrointestinal bleeding.
Note that taking iron supplements doesn’t cure your gastrointestinal lining; it’s a bandaid for the wrong problem.
Also, if you’re low on ferritin (iron transport protein), you can actually directly supplement it, which is what I do. (For vegetarians and vegans, sorry, it’s an animal protein, so there is no animal-free option for that particular supplement.)

First, I’ve been starting to send out rejection letters for BayCon’s flash fiction submissions. I’ve sent out about a quarter of them so far. Sorry for the delay, I wanted to re-read pieces because I wasn’t reading them in my best frame of mind with shooting shoulder pains for several weeks. I expect to get the reject/hold notices sent out this week; we’re starting to prepare the progress report the story will be in, so I need to get a move on.
Second, filtering words. It’s a difficult topic to search for, so here’s a good blog post on it. I don’t like all of her examples, but it explains why adding that layer of indirection isn’t always a great idea.
Third, showers. There I was in the shower this morning thinking it was one of the great wonders of civilization, and I realized I’d never heard (despite reading a lot of Libertarian books in my youth) how either Libertarians or the Tea Party would handle things like sanitation engineering and water management. What changed me from being Libertarian was seeing that public health simply wasn’t doable that way, and Laurie Garrett’s The Coming Plague was the final nail in the Libertarian coffin for me.

Last night, Rick and I went to Borderlands Books for the launch of Seanan McGuire’s book One Salt Sea.
Now, it’s not just a reading, it’s an event. We stayed for two of the three musical sets plus the Q&A session. Sadly, by that time, we were hungry, so we left before the actual reading part of the evening.
It was awesome fun. If you get the chance to see one of these events of Seanan’s just go.

My Thoughts on Abortion

I need to speak up about this.
1. Rights between mothers and their unborn are a zero-sum game. Every right you give to the unborn you take away from all women of childbearing age and all girls who will be of childbearing age. Thus, all limitations on abortions, yes all, are inherently anti-woman.
2. If a woman cannot determine who can or cannot be inside her body, that is institutionalized rape. Thus, in my book, there should be no limitation on abortion. Further, if a woman cannot determine who can or cannot be in her body in the third trimester (as an example), why is rape of pregnant women illegal?
3. Mandatory ultrasounds (as an abortion avoidance tactic) are not external, they are internal. That would be, you guessed it, rape.
4. Most rapes are much shorter than 9 months in duration. Until you’ve had a truly unwanted pregnancy, you really can’t imagine what it’s like.
5. Unplanned (not just unwanted) pregnancies are far more likely to trigger hyperemesis gravidarum, which can be life threatening. Even normal pregnancy and childbirth are very risky for the long-term health of many women.
6. And yet, every unwanted pregnancy is a tragedy. I volunteered at a family planning center. Most of the women I met were having an abortion because they couldn’t afford another child. Very few actually wanted an abortion, it was simply their best option. I have held the hands of women I’d never met before (or since) while they sobbed in the recovery room.
Obviously, I’d prefer more perfect planning for pregnancy or non-pregnancy. However, no method is perfect.
I’ve been raped. I’m glad I wasn’t pregnant as a result, but if I were, I’m glad I could have an abortion. I can’t imagine having to see the face of my rapist over and over in the child. I can’t imagine the legal wrangling in the case of an adoption — or worse, if I chose to keep the child and was ordered to turn the child over for visitation. I can’t imagine possibly continuing any evil in the world.
I can’t help but think that Mike Huckabee hates women who’ve been raped more than he hates rapists.

I’m really really really not a one-draft writer. At some point, I hope to dazzle you all with an illustration of how much I’m not a one-drafter, but today is not that day. Generally a first draft for me runs very short — somewhere between 1/3 and 3/4 of the final length.
To paraphrase how Tim Powers described my first drafts at Clarion: the stage is bare, the actors are auditioning as the scriptwriter’s in the front row re-writing the piece, and there’s only tape on the stage to tell them where to stand. They’re not quite that threadbare, but the layer I get written first is the plot (the piece he said this about, I’d gotten the bones down for a three-plotline short that was 3,800 words and, at most, 1/3 to 1/2 its final length).
Vylar Kaftan talks about her revision statistics, including her A, B, C system for stories.
So below are mine. My first drafts fall kind of between A and B. Right now, they’re in C shape, but if I were done re-thinking them, they’d be moved up to the next categories. Submitted Previously, well, those are Bs. Out at a Market and Sold, obviously, are As.
Until such time as I have a sufficiently developed draft, there’s no point in categorizing it, but most of my pieces need significant steeping. The most recent piece I have out at market was one I wrote the first draft of in 2007. The oldest is one I wrote the first draft of in 1990, one of the first shorts I wrote and one of the most difficult pieces I’ve written. 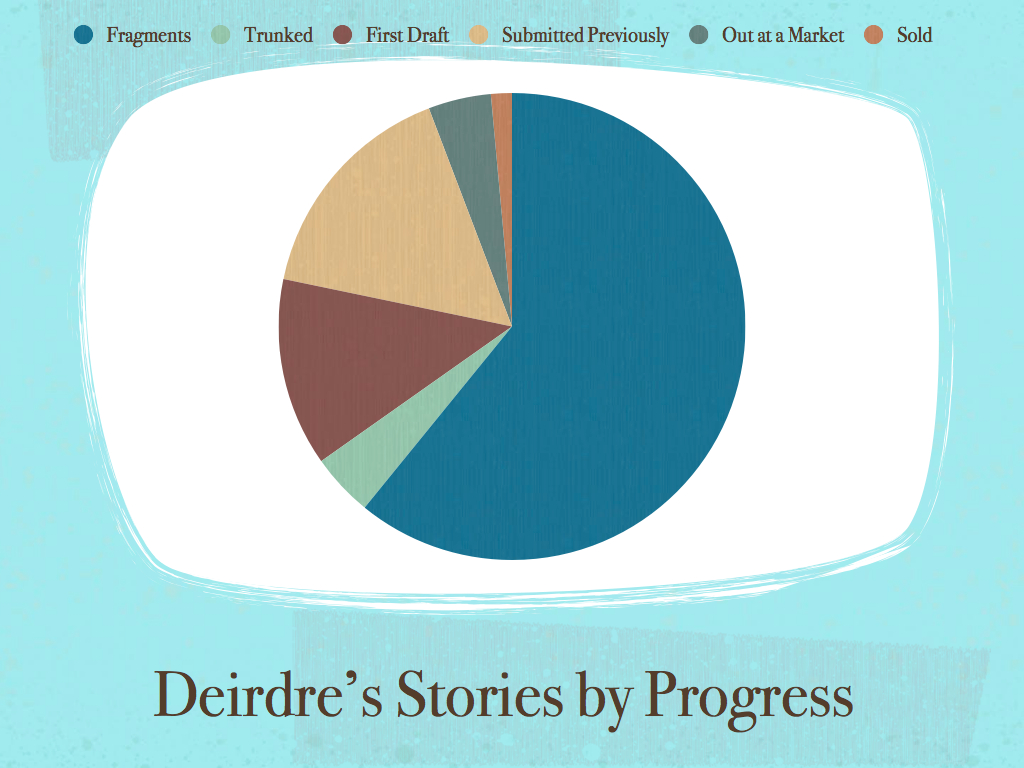