How I thought Web Commerce Would Be Different

…than it actually is.
When I first heard that people were going to be able to shop over the web, I had some expectations about what that experience might be like.
I was reminded of this when I was standing outside my London hotel waiting for the Hotel Hoppa bus, and saw another woman who had the same obscure brand of handbag — and, having never seen an ad for said bags, I wondered how she’d found out about them. In neither of our cases was it through advertising.
Here’s what I expected, back in the day, that I’d see when I logged into a place like Nordstrom:

One of my peculiarities is that I don’t buy black or brown unless it’s something spectacular (or spectactularly funny to me, in the case of Woot t-shirts). I own no black or brown shoes, for example.
So let’s take a look at Nordstrom, who presumably knows what I’ve bought from them, and have a look at the home page when I log in, shall we? 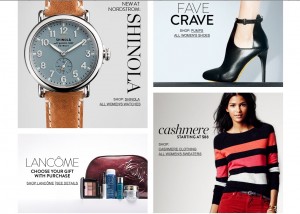 Below the fold is much the same.
How much does this draw me in? Frankly, it says that my interests aren’t at all relevant to what the company wants to push on me. No doubt this is why I’ve felt less and less of a draw to Nordstrom over the years.
Now, you might think I’m singling them out, but this is an endemic problem. It just happens to be an endemic problem with a company who has enough information about my purchase history to do something more meaningful.
In focusing on what companies pay them to push, they ignore their real customer and their real customer’s real needs. Nowhere is this more obvious than in the phrase (which I wish would DIAF) “must have.” It’s a phrase for the intellectually dishonest and lazy to use, in my opinion. It’s about telling the sheep what to do, not about providing what people actually desire or need.
What I’d actually hoped for in the internet shopping experience was something completely different: a way where one could find more indie-made goods that would be of interest based on some kind of social networking that is not based on advertising. In other words, based on what people you know and who have similar taste to yours actually like that you may not know about yet. Learning by networking based on similar aesthetic sense.
How you do that without big money from advertisers corrupting the process is left as an exercise in futility.
While that’s my grand utopic vision of internet shopping, it remains an impenetrable problem, apparently. Etsy’s as close as it gets to good, and it can be a really long way from good.
Every time I see someone trundling around with a Louis Vuitton logo bag, I wonder: is this something they’ve only been told they should like? Or did they spend that money because they thought it would get them status with other people? Do they realize how much status they lose in the minds of other people? I have nothing against LV bags per se; they do make fine leather goods. However, they are not the only company making fine leather goods. Also, I see relatively few of the “no logo all over” lines like Epi than I do of the ones that are walking ads. Worse still are the people carrying fake LV bags.
Frankly, every time I see someone carrying anything that’s a walking ad, I think, “Really? That’s all you think of yourself? That you’re a billboard for someone else? That you paid to be a billboard for someone else? Show some self-respect.”
I thought web commerce would be more about being more individual. Instead, it seems more about the homogenization of tastes. Homogenization is fine for milk.
The handbags we had in London? Ella Vickers. Probably not your thing, but, hey, the world’s a big place.