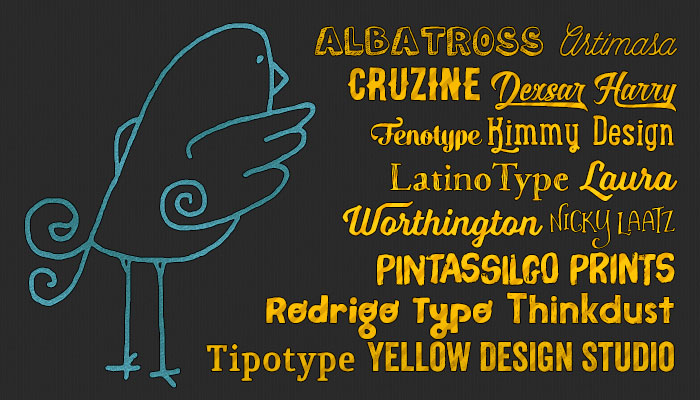 I know you know I love type. And fonts.
Here are my favorite indie type foundries in alphabetical order. I seem to have a thing for Latin American foundries.

Jay Hilgert’s an Oklahoma designer with some cool fonts like Altus and Boom! Featured up top is Oil Change.

Artimasa’s one of several Indonesian type foundries. Up above is Hipsteria, but I also love Zakia, Casually, and Prada.

If you’re going to start doing historical romance covers and want a great cover font, investing $99 (currently on sale for $89) in Borges Lettering’s Desire will go a long way. Sadly, I’ve not personally been able to justify it yet, but I do paw at the monitor every now and again while the page is open.

Peter, a designer from Bratislava, Slovakia does some great design, but he’s also done some great fonts. Up top is Brooklyn coffee. My personal favorite is Rocknroll, and when I look at Memento, I always think it’s an Indonesian design.

Dai’s font, Eubie Script, is fun and bouncy, and you really need to see the demo site for it. It has an amazing try me box (better than any other I’ve seen). Nicely done, and I’ve just picked it up. (Naturally, after I finished the header graphic.)

One of the interesting Indonesian font designers, of whom there are several. Dexsar Harry has several lovely designs. Featured up top is Roverd. I haven’t yet picked up Bandung, but I’m looking forward to getting it soon.

Emil Bertell from Finland produces some lovely swashy faces like Alek (shown in the sample above).

Kimmy Design is based out of Santa Monica, California, about ten miles from where I’m typing this. (Away for the holiday weekend.) I have most of her fonts and some of her non-font graphics. I reuse this watercolor template frequently. Up top is Lunchbox Slab

Latinotype’s based in Chile and has lots of great fonts. Shown in the header image is Macarons. Up at the top of the page, my name’s in Courtney, and blog post headlines are in Four Seasons Pro. (So yeah, this entire site uses South American fonts.) I also use Showcase on desamo.graphics

I’m so pleased I got to meet Laura at Typecon. Awesome experience. I was tongue-tied and everything. I couldn’t remember the name of a single font when I was trying to tell her how many of hers I had.
One of the cool things about her fonts is that she has font families that are coordinating but dissimilar fonts, all designed to go together. Adorn, in particular, is a brilliant collection. Shown up top is Voltage, one of her newest.

Nicky’s a designer from Cape Town, South Africa, who does awesome hand-drawn things including hand-drawn type. Here’s her shop. Shown in the pic above is Vanilla Frosting.

PintassilgoPrints is an amazing foundry from Brazil. If I had to describe their type collection, it’s of the type of fonts you’d expect to see on small label mid-century jazz covers. Some of their stuff draws from earlier (30s) and some later, but always with a fresh new twist.
The font I used above is called Brush Up, though I keep wanting to call it Olio because of one of the promo photos.
As a bonus, the bird is from a different font, Card-o-Mat Buddy Birds.

Rodrigo Typo is from Chile and specializes in unusual and fun typefaes, especially display faces suitable for children’s work. Another aspect that may come in useful is that they always include Greek and Cyrillic letters, which is quite unusual for most indie foundries. Shown up top is Pequena.

Thinkdust is based out of the UK and has made some pretty popular modern fonts. Shown is Nanami HM.

Tipotype’s the first type foundry in Montevideo, Uruguay. It produces, among other things, Quiroga, the typeface I use for the body face on this site. (Meaning: this paragraph is set in Quiroga as you read this if you didn’t override styles.)

Ryan Martinson’s Yellow Design Studio is the only foundry where I own all the fonts. I love them all. Shown is Veneer, one of my favorites.