Previously on Norilana Books and Vera Nazarian, Something Needs To Be Said and Something Else Needs To Be Said.
Let’s note that it really is and here: Norilana is a sole proprietorship and therefore legally the same person as Vera Nazarian. (Last I checked, which was admittedly a few months ago.)
Today, Vera Nazarian started an Indiegogo campaign to raise money for back royalties owed Norilana’s authors.
She did not list the authors as creditors in her bankruptcy discharged in 2012, even though she hadn’t paid royalties since (apparently) 2009.
Further, now she’s apparently preferentially wanting to pay her author creditors amounts that should have been partially discharged in bankruptcy even though this is unlawful. Does anyone have contact information for Kevin J. O’Donnell, Jr.’s heirs? They may be interested in getting the bankruptcy overturned.
You know, the guy dying of cancer that she snubbed to the tune of $109,364?
Sarcasm alert:
But, of course you should believe that the $19,198.36 of back royalties that she’s raising the money for herself (rather than having an independent party doing it for accountability purposes) is going to her authors.
And of course you should believe that $19,198.36 is in fact due.
Which, let’s look at.
Here are the titles from third parties that aren’t public-domain authors. I’m assuming Val Noirre is Vera’s pseudonym (because it’s not on her list of authors due royalties) and thus am excluding.

Titles that Norilana Still Publishes Where Royalties May Be Due

For the next part, let’s assume the following gross oversimplifications:

a.k.a. Time to check Deirdre’s arithmetic. 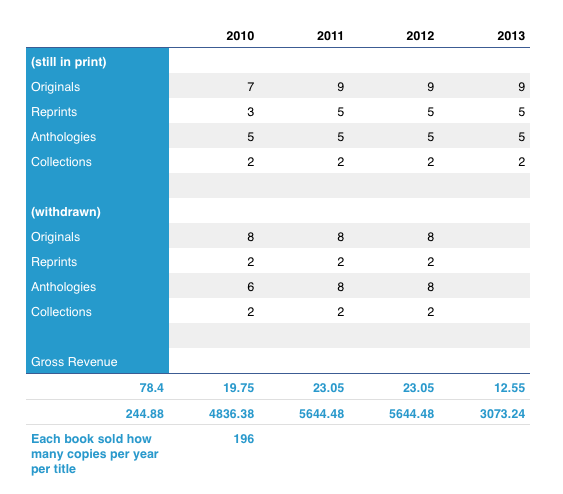 So, what does this mean, gross oversimplifications aside?

So That Selling Books Thing

Vera Nazarian aka Norilana Books simply has no idea how to actually sell books. If you’re a publisher and consistently, on average, selling under a couple hundred titles per year with dozens of titles to market….
You’re doing it wrong.
Especially if you publish twelve such titles in one year and then the next year, “Oops, can’t pay royalties.”

Everything about this Indiegogo campaign is intensely problematic. We don’t really know that the money is owed (except for Eugie Foster having opened the can of worms). We don’t really know how much is owed, and we only have vague ideas of to whom. It’s possible some authors have been paid (while others have not). There’s also what someone called “the Vera factor” in all this. I’ll let you figure the meaning.
Raising money to pay debt like this is also problematic. Vera already received that money. She spent it on other things (like her cable bill, which she details in one of her comments to my first post linked at the top).
All I can say at this point is: I don’t even.