I’ll post Tina’s email first, then respond to her points.

From: (Tina Engler)
Sent: Thursday, September 3, 2015 2:39 PM
Subject: [ec_biz] legal update
We will not be responding in a public venue to the “trial by social media” smear campaign being staged by the defendant and her counsel and will instead keep this in the court and on our private business loop. While we cannot respond to most of this, period, we can respond to some of it.

http://fightcopyrighttrolls.com/2015/07/09/marc-randazza-must-pay-600k-for-clear-and-serious-breaches-of-fiduciary-duty-against-his-former-client/comment-page-1/
In closing, we will provide you with a bit of our side of the situation within the 30-day time frame provided by the court for response. The bulk of our evidence will be presented at trial in March.
Tina

I’d previously commented that I didn’t feel right posting this because of the content. However, it’s directly relevant to Tina’s (and my) point #1 above, so I’m posting it.
I received this on August 21st, but it may have been posted on the 20th. Somewhere around there.
Emphasis added.

It’s unfortunate that only hindsight is 20/20. Why can’t foresight work that way? I regret the day I read my first romance novel, but I especially regret the day I published my first book. It was genuinely the biggest mistake of my life.
I should have taken that full scholarship into the phd program I applied to because my life might have turned out so differently. I might never have developed panic disorder. I definitely never would have had to deal with a horde of self-entitled, paranoid, liars… At least not outside of a lab setting. My word, honor, & integrity wouldn’t have been questioned, let alone assaulted, on a daily basis, because I wouldn’t be in a profession that is glutted with conspiracy theorist women who thrive on conflict, gossip, drama, & inflicting pain on others.
Growing up, my biggest fear was living a normal life because it felt like mediocrity; today I would give anything to have that. I used to feel sorry for women who chose unpaid professions like being a housewife; now I envy them.
Point blank: I’ve made countless mistakes in life, but I’ve never cheated anyone. I don’t have a poker face or a filter; people always know where they stand with me and they always know where I stand on every issue that matters to me. I’ve never kept skeletons in the closet because I have no filter and because I never understood the utility in pretending. I might be a handshake kind of bumpkin, but I’m not a swindler.
The past 11 years have been… Not worth this. I realized tonight that I’m constantly throwing good energy after bad by giving a shit about my completely annihilated reputation. The chips are going to have to fall where they may… I just do not care anymore. Even if I wanted to care, I’m too tired to.
Some of you will view me as depressed; some of you will view me as a sympathy seeker. Truthfully? I’m too numb to feel anything at all so view me as you will.
I’m leaving this post up until I wake up and then I’m closing all my social media accounts. That should give plenty of time for friends, family, & gossips alike to read this. I’ll miss the interaction with friends and family, but you know how to find me. To my readers…
I’m sorry I let you down by not finishing the Trek, Viking, & Death Row series. All I ever wanted to do is write, but for the past 11 years it’s been nothing but one thing after the next. (I’m not the type of person who can write while constantly feeling anxious.)
It is for this reason that I am pulling my Trek story out of the “Alien” anthology. I don’t want to hold up Laura, Amy, and Tara by forcing them to wait on me to finish edits that could take me who knows how long. Plus, as I’ve already told my mom, I decided not to chance poisoning the success of these 3 talented authors by having their names tainted by mine.
Laura can & will carry the anthology solo. I wish I had her strength & resilience. A stroke doesn’t stop her, nor do the endless unchilled who threaten her on a daily basis and email her things like “I wish you had died when you had that stroke so EC would go under and I can get my rights back.” (All that just for being a professional who doesn’t trash talk on social media or hatch plots to get out of her contracts.)
At any rate, this post is turning into a biopic dissertation so I’ll end here. I will miss all of you I regularly interact with… And I genuinely mean that. It’s just time for me to do a Kenny Rogers and “know when to walk away, know when to run.”
Take care of yourselves. Hopefully we’ll meet again. xx

Now, did Tina delete the account and/or posts? I don’t know, but people said they could no longer reach her account, and neither could I.
What I do know: generally, deleting (or hiding) anything possibly relevant once one is in litigation isn’t a great idea.
Draw your own conclusions.

I hadn’t realized the @Retireme15 account had posted to #notchilled previously in April, but I don’t catch everything.
I’ll just note two things: this tweet was posted about ten minutes before Tina’s email to the biz loop was posted; it was posted at a time when another pro-EC and pro-STGRB tweeter was purportedly active. 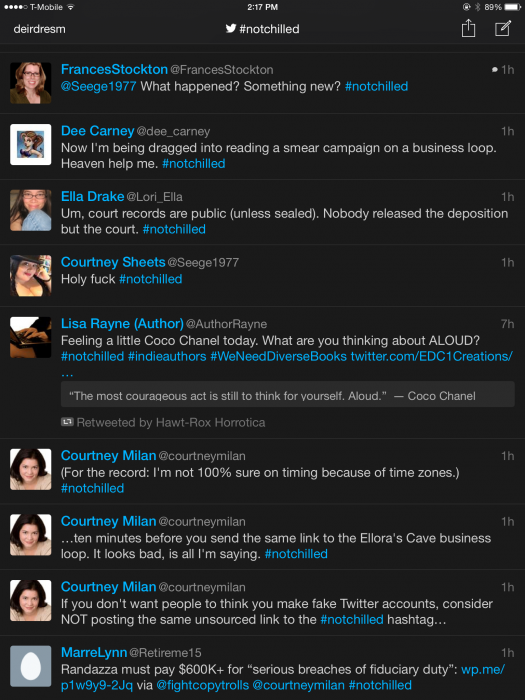 (Click image for full size; troller’s at the bottom.)
And a response from the blogger who posted the article Tina links to in the first place:

@Retireme15 @courtneymilan To be clear, while I have a low opinion on Randazza’s ethics, I think as an attorney he is…