I’d forgotten to set a due date on one January to-do item, so I missed that Ellora’s Cave v. Dear Author docket item 69 became available last week. I finally thought to check today, and have uploaded it to my Dropbox and also updated the docket.
Docket item 69 is a transcript of the case management conference that took place on January 26, 2015. There are a lot of tidbits in this 22-page document that are interesting, and I’ve included three highlights below. 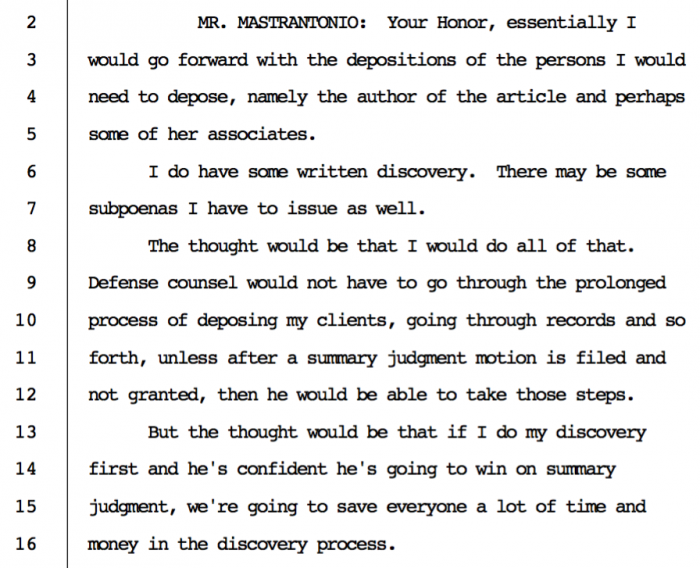 Transcript of the above (emphasis added):

MR. MASTRANTONIO: Your Honor, essentially I would go forward with the depositions of the persons I would need to depose, namely the author of the article and perhaps some of her associates.

I do have some written discovery. There may be some subpoenas I have to issue as well.

The thought would be that I would do all of that. Defense counsel would not have to go through the prolonged process of deposing my clients, going through records and so forth, unless after a summary judgment motion is filed and not granted, then he would be able to take those steps.

But the thought would be that if I do my discovery first and he’s confident he’s going to win on summary judgment, we’re going to save everyone a lot of time and money in the discovery process.

In other words, Steven Mastrantonio, counsel for Ellora’s Cave, stated the very discovery plan that Randazza later claimed they agreed to, in contradiction with Mastrantonio’s filing in docket item 48. 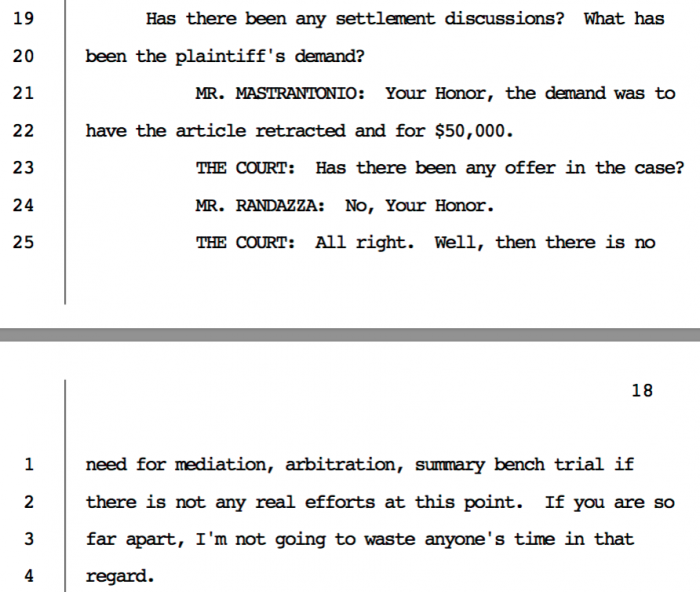 [THE COURT:] Has there been any settlement discussions? What has been the plaintiff’s demand?

MR. MASTRANTONIO: Your Honor, the demand was to have the article retracted and for $50,000.

THE COURT: Has there been any offer in the case?

THE COURT: All right. Well, then there is no need for mediation, arbitration, summary bench trial if there is not any real efforts at this point. If you are so far apart, I’m not going to waste anyone’s time in that regard.

You’ll note that the Curious post is still up, and was later the subject of a relatively small correction post.

Judge Asks About Another Case…That Randazza Worked On 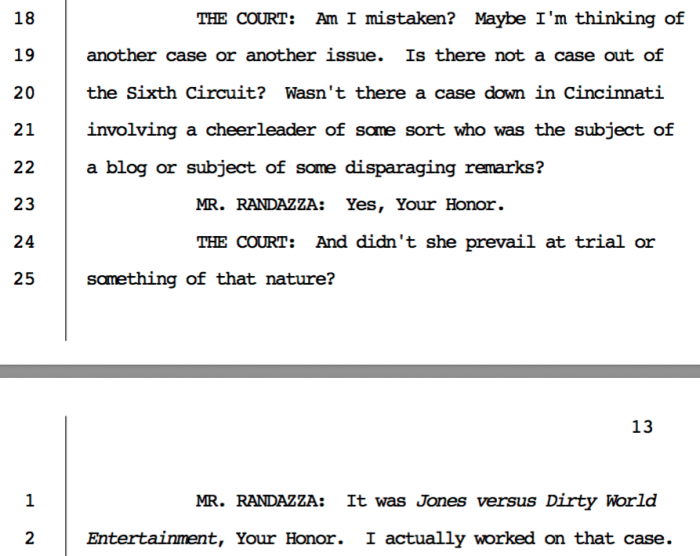 THE COURT: Am I mistaken? Maybe I’m thinking of another case or another issue. Is there not a case out of the Sixth Circuit? Wasn’t there a case down in Cincinnati involving a cheerleader of some sort who was the subject of a blog or subject of some disparaging remarks?

THE COURT: And didn’t she prevail at trial or something of that nature?

MR. RANDAZZA: It was Jones versus Dirty World Entertainment, Your Honor. I actually worked on that case.

MR. RANDAZZA: It was overturned on appeal.

It’s actually the only case law I could find on CDA § 230 in the Sixth Circuit. Still, gotta be disheartening to be opposing counsel when the defense’s attorney is so so so far ahead of you.