My photo, First Man, has been accepted for Foothill College’s Urban Ruins exhibit, which runs from September 26 – November 2nd.
I used two programs for this: Apple’s Aperture, which I used for straightening and cropping the image, and Nik Color Efex Pro, specifically the saturation stylizer effect.
My thanks to Mung and Digit, whoever they may be, for such photographable street art.

The antenna guy came today. We used AV Solutions Pros out of Mountain view. He got it done as quickly as it could be and with great quality. We’re getting some channels I hadn’t expected to, and it all seems very nice. Of course, we’re subject to weather fade, much like satellite is, but he said it’s really worst conditions now due to the leaves on the trees.
Over-the-air cost so far is a wash with buying the HD shows the first year, but of course it’s a gain in years after that.
Now it’s an ongoing saga to figure out content we care about in this new ecosystem, plus I want to make sure to pick up any interesting show premieres somehow — that’s how I discovered FlashForward two years ago.

What Do You Write, Take Two

A few years ago, I wrote this post called “What Do You Write?” There were some interesting comments.
I’m dusting it off because Worldcon’s coming up, and some people will be asked what they write. Perhaps this will give you some time to think about it before someone Asks The Question.

Yo.
Worked. So it turns out I can use

He’s a lounge-singing chivalrous cowboy who believes he can never love again. She’s a mistrustful green-skinned mechanic with a flame-thrower. They fight crime!

In addition to the usual computers, we have three devices we can watch Netflix instant on:

Of the three, the best user experience (not to mention the smallest) is the Apple TV.

Maybe I’ll make a little movie about it.

Rick and I drove our Comcast equipment back to its home in Foster City on Saturday morning on the way up to the city. The man behind the counter gave me a stickie that said $14.48 — as in the amount I’d be refunded.
Catch is, I had a bill that wasn’t yet paid (or due), so that wasn’t the final number.
A few minutes ago, I got an email: “Your Aug 7, 2011 Comcast billing statement is ready for viewing.”
So I tried to log on, curious what the final total is, and this is what Comcast’s site said:

Getting Rid of Cable

Before we met, neither Rick nor I had anything other than broadcast television. Not long after we met, I started to work at TiVo. At that point, we started getting cable again, and haven’t stopped since.
Until now.
Back when I re-subscribed, basic cable inched up from the high $20s to the mid-$50s. What I hadn’t really obviously noticed was how it had further creeped up in the last two years to close to $70, even on a discount plan.
We added Starz recently so that we could watch Torchwood, but it was free for six months.
I checked my cable bill the other day: it’s now $95.64.
Not on my watch, it’s not.
So then came the math: how much would it cost us each month to replace cable?
I decided to start first and see how much it’d cost us to buy the shows we can outright. Granted, many of these we don’t care that much about, and some (e.g., broadcast shows) are available over-the-air.
Even with that, though, if we bought all of them (including The Daily Show and The Colbert Report), it’d still be a wash.
So, given that, and that there are various means of getting the shows we want to watch without Comcast, cable is going bye bye tomorrow, replaced by a newer Apple TV (already purchased) and probably a Boxee in the future, as well as perhaps another small media server computer at some point.
The real beauty of this plan is the ability to actually pay more directly for content that we want to fund, rather than aiming a gob of money at Comcast, where we’re paying for ESPN, Fox News, Soap Net, Trinity Broadcasting Network, the Brazilian Futebol channel (srsly), the Gospel Music Channel, and a bunch of other channels that, at best, we don’t give a rat’s ass about, and, at worst, we think are harmful to sanity and civilization. (I don’t mind paying for the multi-cultural channels: I think they provide value to their target markets. I just don’t happen to be part of that market.)

This is only a test.
Available at LJ at this URL.

"A Sword Called Rhonda" Now Available as an E-Book 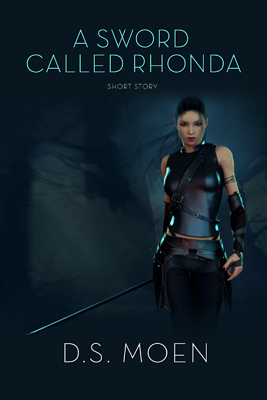 “Hey, Karma,” Rhonda the sword whined, “I need to go, like, shopping.”

She hung from the wall of my small home in what used to be suburban Palo Alto. Being far away didn’t help. I could hear her just as clearly as if I’d held her in my hand with her voice coming out the end of the hilt. I’d tried hanging her from my waist at first, but she just yelled loud enough for everyone to hear. Now, I carry her over my shoulder so she talks in my ear.

I hadn’t responded, so she yelled. “Are you listening?”

Two weeks ago, I bought the sword at the city’s disincorporation sale. It was a fine sword, made of good strong steel that could take a beating. At the time, it seemed like a good deal.

Finally available in a standalone, DRM-free e-book from the following resellers: