In 2004-2005, I worked for Quova as a Network Geography Analyst.
As a practical matter, given that MLB was one of our largest customers at the time, this meant that we fielded complaints for people who were locked out of viewing baseball games where they should not have been, and a good chunk of my job was investigating those complaints.
This is intended for a mixed-level audience, so I’m going to skip deep nuance and detail. ## Simple Explanation

So the real trick to geolocation is to have as many knowns as possible. This means having server space on fast networks around the world, being able to triangulate in on locations of interest, and getting different results over time.
You can read more about using millilightseconds in this humorous story of network diagnosis.
This four-part series about traceroute is quite good, and covers some of the wrinkles.

My Own Little Experience

I mentioned this on Twitter at the time it happened.

There are some interesting nuances here:

Update to this section, May 2015: It turns out, and I’m thankful for this, that there is a far more ordinary explanation for what happened. I can’t prove it’s what happened in December, but it did happen last week. In January 2014, Rick and I were traveling and would be in some of the remotest parts of the world (in fact, we spent three days out of satellite range of Internet, believe it or not). I gave admin credentials to a friend who lives in the LA area to blogsit and make sure any security updates got applied while we were gone. It turns out that, since saving that password, she’d switched her mobile device from Verizon to T-Mobile, and I’d since changed the admin username. She doesn’t use mobile data much, so it didn’t try to access my site for a long time (or frequently). And there you are.
My apologies to Jaid Black for the insinuation.
Also, a better security method for dealing with this issue is to make a second admin user. Doh.

Dec 2013: One Year Ago Today: Into the Exclusion Zone

Montserrat’s a beautiful place. As you sail in, it looks like many other islands in the Caribbean with some nice mountains with clouds surrounding them (as is so often the case with islands). We landed at Little Bay, which is at the north of the island.

We tour the local sights, including the proposed location of the new capital, and hear about how so many thousands of people on this tiny island have had to flee; over half of it is still in an exclusion zone, though there are (apparently) multiple, nested, exclusion zones. 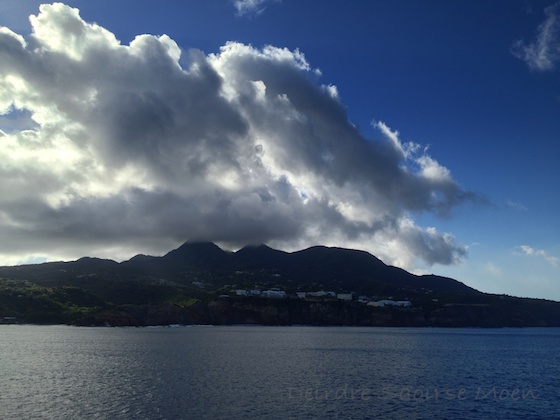 The island has some lovely flora. 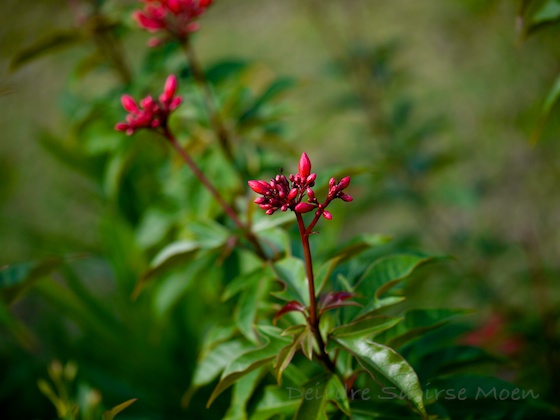 And, as we drive to the south, lovely mountain views to the north. 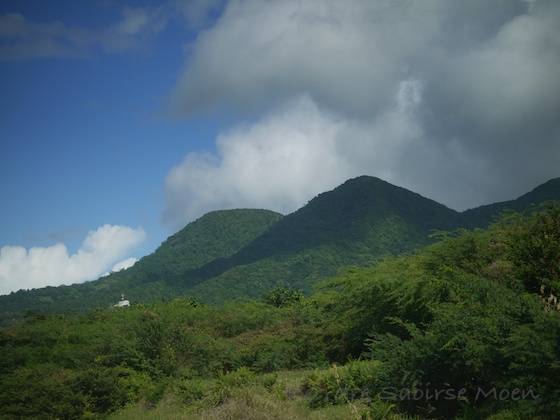 It was once a huge tourist destination where the rich and famous vacationed. Where a number of famous albums were recorded, including Jimmy Buffet’s song Volcano. Before that, it was one of the locations of many Irish slaves and indentured servants. In 1768, on St. Patrick’s Day, the Irish slaves revolted, but slavery was not officially abolished until much later.

At present, it’s known for how greeen it is. 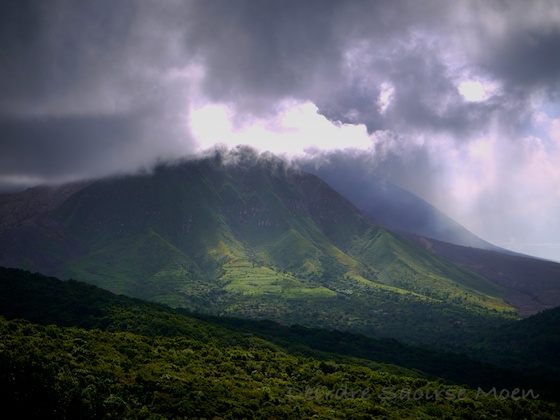 Our buses trundle along, and our driver says she doesn’t think we’ll get into the exclusion zone. It’s Christmas Day, after all, and the police have to open it up, and they’re home with their families. We pull to the side of the road right before the first locked gate, aka the first level of the exclusion zone. Cruise staff go to a building near the gate with a couple of locals, and voila, we have a key.

Clearly, something was arranged in advance.

So we head up into the exclusion zone, but most of the homes look, well, normal. Like places that had been abandoned, but not in bad shape.

When we drive over a ridge and finally see the first real effects of the volcano at Belham Valley. It doesn’t look so bad. A small river of dirt, right? 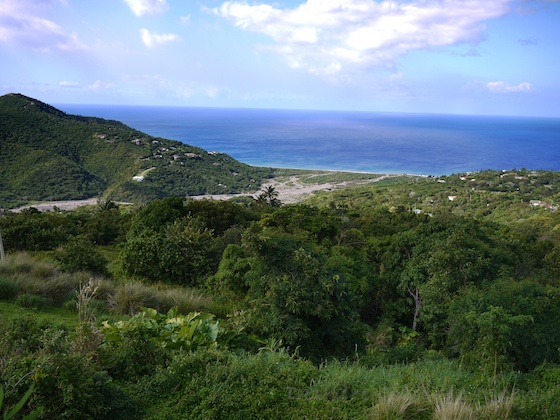 On our way down to Belham Valley, we see an abandoned house. The driver pauses for a moment to point out that the volcanic gases have dissolved the steel roof over the last 18 years, and that every single building we’ll see has similar structural damage that may not be as visible. 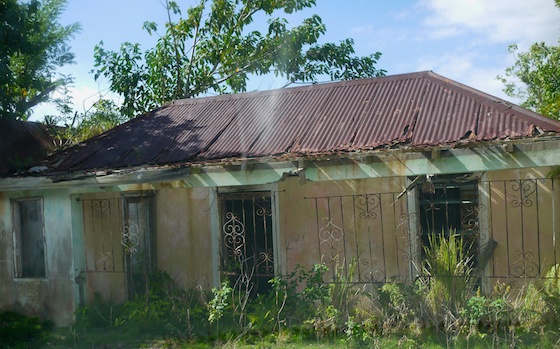 We take the road in through the second exclusion zone gate and pull up to a well-traveled spot. We’re warned not to walk off the path where people have driven because the ground isn’t as settled as we think it is. The volcanic ash is much, much deeper than we think. 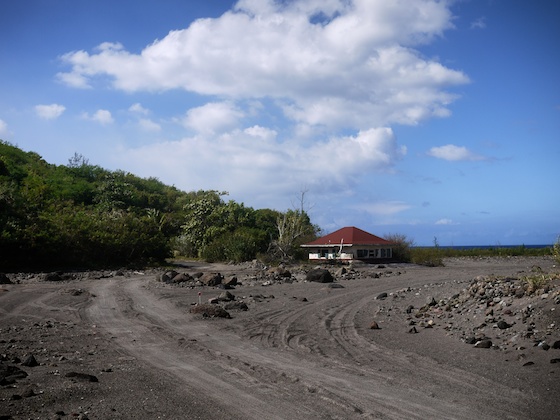 You can walk up to and (if you’re brave and/or stupid) stand on the second story roof. 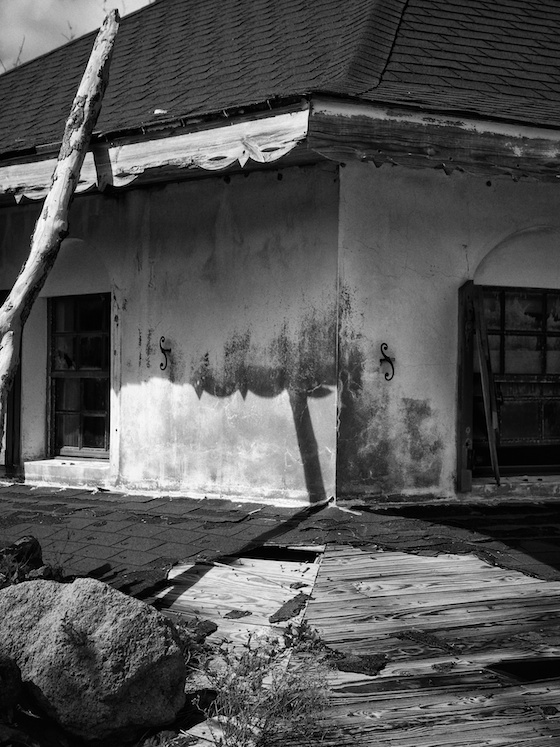 It’s not hard to see the volcano damage to the details of the structure. 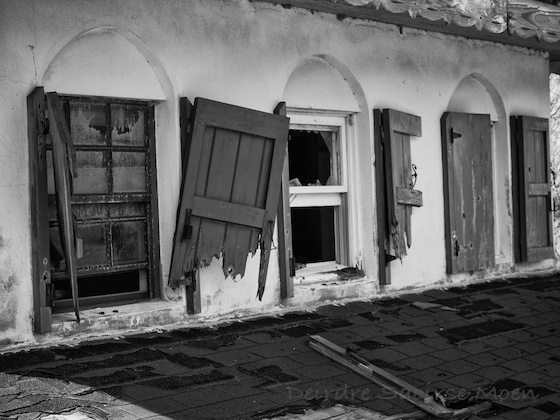 We drive further into the exclusion zone, through a third gate. Some houses are really obviously damaged for good. 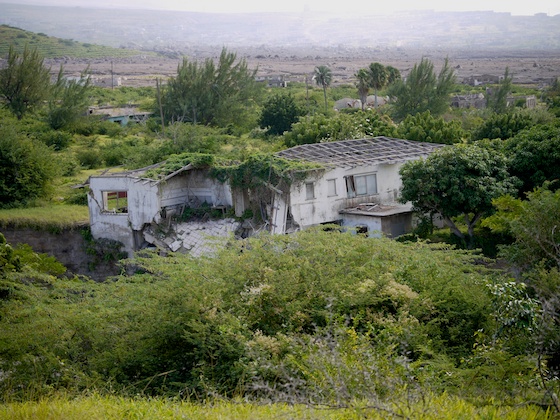 While others don’t look so bad unless you look more closely. 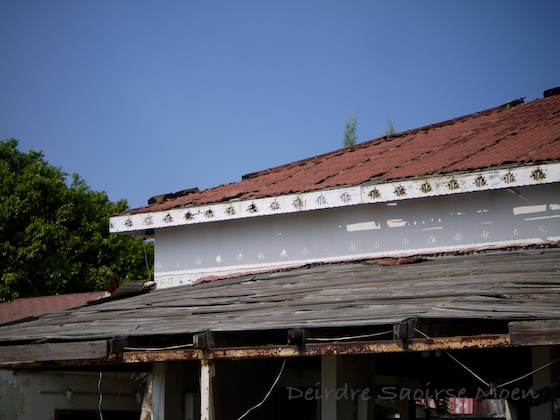 We climb through what used to be a hillside hotel, but is now a lookout point. Some of the houses look almost normal if it weren’t for the river of ash in the background. 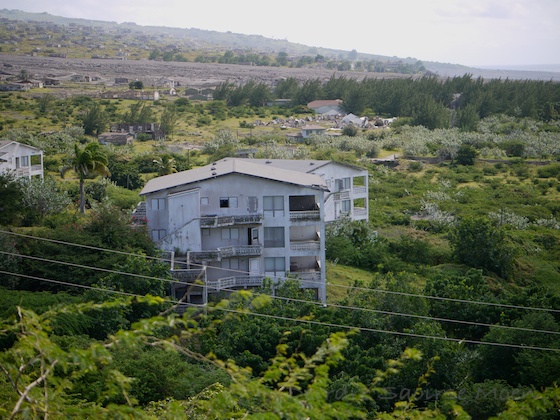 Then, turning to the left, you see just how much ash there is, burying everything at least 2-3 stories for miles. 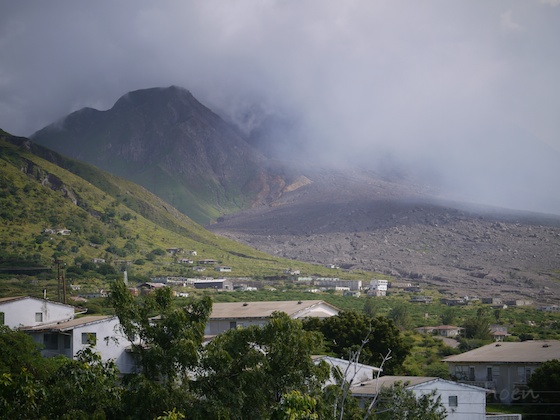 The lower half of the island is just a plain of desolation that used to be a capital city. The ash is not particularly compact, so in some cases it’s not even a little bit traversible. 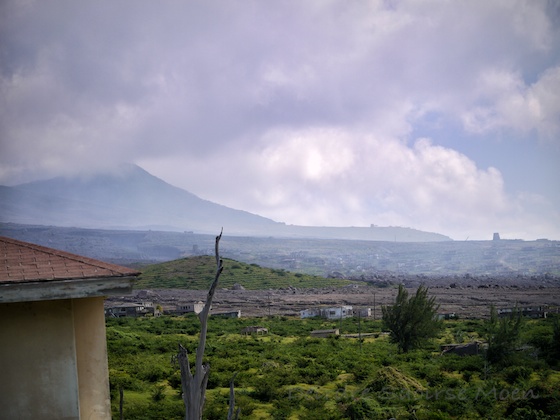 It’s the weirdest thing. It doesn’t feel safe, yet it doesn’t feel as unsafe as it actually is. I had that experience in Hawaii, too.

For more pictures of the volcano and region, please see the Monserrat Volcano Observatory’s flickr page. 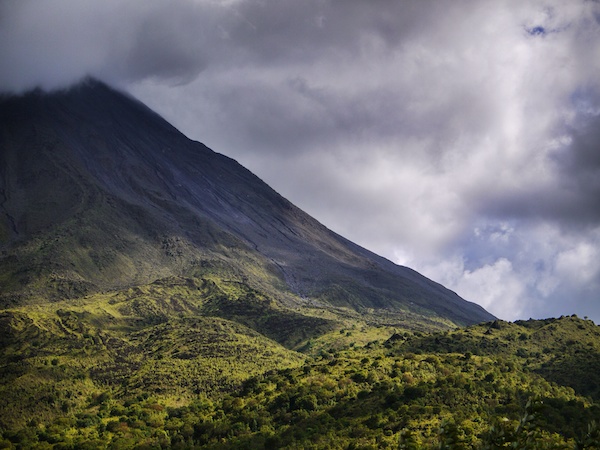 ] We were very lucky to visit Mount Arenal on our recent Costa Rica vacations. I didn’t get to see Mount Arenal on my first trip in 2012. On that trip, I only visited the Papagayo region in the northwestern Guanacaste Province.
Mount Arenal isn’t the most active of Costa Rica’s six active volcanoes, but it is one of the most accessible from Costa Rica’s capital of San José. For that reason, almost 70% of Costa Rica’s tourists visit here.
Our vantage point where I took this photo came after a drive through the Arenal Volcano National Park, where we saw white-faced capuchin monkeys and quite a few birds. We didn’t see coati in the park, but we did see some outside.
After our trip to see the volcano, we relaxed in the hot springs nearby, fed by the heat from Mount Arenal. There are many, many hot springs in Costa Rica. We happened to visit the Tabacón hot springs, which was an amazing experience with so many high-quality pools to visit!
We booked our Arenal Volcano day trip through Swiss Travel, Costa Rica’s oldest and most respected tour agency. (Currently, they’re updating their website, so I can’t link to a specific tour.)

I’m writing a book about our Costa Rica and Nicaragua vacations. My new book should be out in late spring 2015.

Want Some Ideas for Your Costa Rica Vacations?

I have blogged about some trip ideas for Costa Rica Vacations.