Twenty Years Ago Today: Scientology vs. the Internet 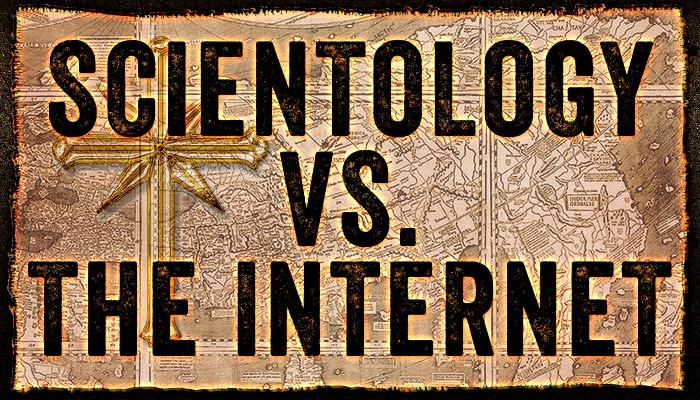 Twenty years ago today, the battle of Scientology vs. the Internet leveled up with the anonymous posting of secret Scientology scriptures to the newsgroup alt.religion.scientology. Here’s what the Wikipedia page says:

On December 24, 1994, the first of a large number of anonymous messages was posted to alt.religion.scientology, containing the text of the “secret” writings of Scientology known as the OT Levels (OT stands for “Operating Thetan”).

There were five posts.
Large numbers of anonymous posts came months (and even years) later. The initial anon volley, however, was small.
As Wikipedia says:

Incorrect.
First, for those who don’t know the Xenu story, the tl;dr version is that due to overpopulation, Xenu ordered people brought in for an income tax audit, froze them, then brought them en masse to Earth where they were blown up in a volcano (Hawaii and Las Palmas, among others) with hydrogen bombs, sticking those spiritually frozen beings to others. And that, in order to be free, one has to audit all those beings stuck to you using Scientology’s expensive and confidential procedures.
In fact, a Class VIII course (which covers the materials of OT III) tape transcript had previously been posted non-anonymously to alt.religion.scientology by Dennis Erlich: tape 6810C03, titled Assists, that included information about Xemu. You can find a transcript linked from this page.
When Erlich posted the transcript, what did Scientology do?
Crickets.
That’s right. Nothing at all.
The first person to write anything publicly about Xenu was Robert Kaufman in his 1972 book, Inside Scientology: How I Joined Scientology and Became Superhuman. Links to the actual book: PDF and HTML

There were no offices available in which to discuss highly dangerous data, so we used a bathroom, Cramming perched on the edge of the tub, myself astride the throne.
“What don’t you understand about these instructions?” she asked.
“I can’t even begin to tell you. For one thing, it says, ‘First locate a body thetan.’ Now, how in hell do you locate a body thetan?”

Thetan, in Scientology parlance, means the spirit as distinct from the body and the mind. They don’t mean brain when they say mind. It’s more the spiritual mechanics of the thetan/body interface.
The space opera antics comprising OT III meant that normal people had been so traumatized, what with being shipped all the way over here and blown up, that they no longer were capable of running bodies on their own. Some of them banded together in clusters and others as individuals, and they basically hang around less messed-up beings—like you and me—and make up our body, not to mention numerous ailments.
In 1981, Richard Leiby of the Clearwater Sun became the first journalist to publish a piece describing OT III, including an excerpt from Hubbard’s writings. The article opens:

At the Fort Harrison Hotel in downtown Clearwater, Scientologists are learning to leave their bodies, control other people’s thoughts and communicate with plant life. They learn this by reliving a galactic holocaust carried out by space creatures millions of years ago.

(Note: insert here a Reader’s Digest article from 1981. See notes at bottom.)
A summary of OT III and the whole Xenu thing had previously been printed in the Los Angeles Times in 1985:

Documents obtained by the Los Angeles Times show that members of the Church of Scientology believe that mankind’s ills were caused by an evil ruler named Xemu who lived 75 million years ago.

Erlich’s posting wasn’t the first post about OT III or the widest audience. It was simply the first where part of the source materials had been made broadly available on the Internet.
I’ve always thought that Scientology’s embarrassed about the contents, because Scientology’s reaction after the LA Times piece was to deny that these were the materials of OT III. Hubbard was still alive at that point.
Nevertheless, OT III involved the introduction of the concept of “body thetans” in OT III—those pestiferous beings-who-are-not-you clogging up your space and misbehaving on your behalf.
OT III had been covered before, in print and on the internet, several times. It wasn’t new, and thus the CofS wouldn’t go crazy over its revelation. Hence, I hope I’ve debunked the idea that this was a part of 1994’s Christmas Eve “revelation.”

Each of the five Christmas Eve docs consisted of the confidential levels after the state of Clear is attained and after OT III.
These five documents were posted anonymously to alt.religion.scientology through a replay.com crypto remailer. What specifically was posted has been misreported, partly because the source postings have been vaporized from the ‘net.
Here’s the correct document list. They are all still on Wikileaks if you’d like to read them. Source is Dennis Ehrlich’s 1995 declaration.

To be clear, I don’t believe any of this. It’s just the theory.
Dianetics doesn’t work (well) on Clears or above because it asks for components of the reactive mind, which a Clear no longer has. However, a Clear still has body thetans, so when one tries to audit Dianetics questions on a Clear, the person comes up with answers from their body thetans or clusters (of body thetans) and can go into a tailspin. Because there are lots more body thetans, and they’re constantly chattering and complaining.
Further, NOTs theory says that body thetans copy bits of case from other body thetans, kind of the way bacteria exchange DNA with each other (and thus build up antibiotic resistance). Except in this case, it means that problems keep coming back. (Convenient, no?)
Most of these BTs are below the level of conscious awareness, and irritating them, well, “it does affect the body—severely.” (HCOB 15 September 1978 II, NOTs Series 2, Why You Can’t Run Engrams After Clear)
To someone who is an Operating Thetan, the body appears transparent. Anywhere it does not, well, that’s because of body thetans and clusters making it appear solid.
Well, that’s the theory.

Here’s What I Think

Scientology’s a long con with a lot of carnival hucksterism thrown in for good measure.
It’s never produced all of what Dianetics (the book, aka Book 1) promised a Clear was. In 1950. After years and years of spinning new auditing processes, in 1965, L. Ron Hubbard released the Clearing Course. Then after you’d done a boatload of different processes (like a pachinko machine), you finally got rid of enough bad stuff to get to Clear.
Except that you still weren’t a Clear by the Book 1 definition.
So there had to be theories about what was still going on—other than the processes hadn’t worked, of course!
I’m really not sure about what Hubbard did and did not believe of his own con. It’s revealed in the Epilogue of Lawrence Wright’s excellent book Going Clear that LRH pestered one of his underlings to rig an e-meter to kill Hubbard. (That didn’t happen.)
However, at some point, Hubbard realized that NOTs was a big level. Before NOTs, the levels OT IV-VII were a few weeks to a few months, at most. NOTs, however, people are commonly on for years. It became a huge cash cow for people who’d essentially topped out on all that Scientology had to offer, but still hadn’t solved their problems. The same is still true after NOTs, but at least Scientology has more money, right?
And when OT VII and, later, OT VIII weren’t enough to do placate people, the CofS saw to it that people were busted all the way back down to the start with the Purification rundown. Some people have done the whole thing, ground up, two or three times.
I can’t imagine.
One of the things that keeps people in line is the promise of future OT levels. Hubbard died in 1986, so I’m not exactly sure how long they’re going to draw this out before revealing what some upper-level ex-execs have said: there is nothing else.
It’s just one big mystery-in-a-circus-tent after another, and each level isn’t actually what was promised.
Scientology can’t make up its mind if it’s all about the quasi-gnostic concept of the material universe is crap or if the material universe is the real universe. Given that I heard over and over that thetans aren’t bound by matter, energy, space, and time, why should distance in the physical universe have anything to do with anything? Why must telepathic transmission depend on that?
It’s all crap.