Ellora's Cave: We've Heard This Before

First: if Tina’s email comes to pass, it will mean Ellora’s Cave authors will be getting paid. My commentary follows Tina’s email.

From: theeternaltubthumper
Date: Nov 6, 2015 1:33 AM
Subject: [ec_biz] royalty info
I wanted to let everyone know to expect a check for March-June (hopefully!) before Christmas!! 🙂 Checks have resumed going out daily along with their accompanying reports. As these reports are being pulled individually, it will take a solid 1-1.5 months to get them all verified, and mailed. After March-June is completely done, we will repeat the process for July-September (or July-October if it takes closer to 1.5 months than 1 month to mail all the March-June checks.) Point being, everyone will be 100% caught up soon!!
I won’t bore you with too many technical details, but I do want to try and semi-explain the software for the reports: every month has to be pulled, verified, and re-verified before a check is cut. We wanted to send out one check covering March-August, but July and August still need pulled, verified, and re-verified; we figured you’d rather get March-June now and the remainder in the next batch as opposed to waiting on those reports so everything could be included in 1 check. (And hopefully that made sense!)
At any rate, Courtney is busting more butt than usual in an effort to get everyone’s March-June checks to them in time for the holidays. The less email she receives over the next month, the better. Obviously if there is something that needs brought to her attention ASAP, please do email her. Otherwise I will post here when the last batch of checks are mailed so you know to contact her if you haven’t received your check within 10 business days of that date.
Last note: we are going to be switching our biz loop to a different, trackable system after the checks are caught up so we can resume open communication. We are very sorry we’ve had to go nearly silent this past year and look forward to resuming open communication with you to keep you apprised of what’s happening at home base.
If you don’t hear from me beforehand, please have a very Happy Thanksgiving 🙂
Tina/Jaid

Sooooo…Tina’s pre-announcing checks. Remember January’s pre-announcement?
And EC’s going to switch to some trackable system that even major tech companies do not use because…why, exactly? EC’s communication wasn’t top notch even before the whole Dear Author thing went down. It’s not Jane’s fault, nor Courtney’s, nor mine, nor any of the other participants in #notchilled.

Well, I’m glad you clarified that, Jaid. Really. (Note: screenshot is of this link.)

¡¿Four to Six Weeks Per Quarter!?

Let me get this straight: Ellora’s Cave’s controller is spending a solid third to half her working hours verifying (and inputting) royalties and issuing checks. There are, as of October 19th, 813 Ellora’s Cave authors, but let’s round that down to 800 for easy math, which translates to 133 to 200 authors per week.
If we assume eight-hour days and five days a week (even though that’s optimistic), that’s forty working hours a week. An average day would therefore mean 26-40 authors’ royalties verified; an average hour 3.25-4 authors.
Assuming there’s no easy way to make the work process more efficient (doubtful, but let’s run with it), what’s the easiest way to reduce the workload without reducing profitability?
Chop the long tail. From that post:

With over 800 authors, some of those authors are going to be bringing in peanuts and others whole food trucks. Release the authors that are consistently not performing.
As an example, calculate how long it takes to put together all the royalty information, divide by the number of authors. Figure out how much you’re paying the people who do that work, including cutting the checks. Triple that cost. For the authors who aren’t making, on average, that much for the house over the last year, offer to release their titles (for no fee).

Also, it’s probably true that anthologies are the most difficult. Given that anthologies divide royalties between contributing authors, for every anthology, you’ve got to do the work N times. Unless those are really really big sellers, then it’s time to give them a neutral look with a profitability eye.
If some authors aren’t making more for the house than the cost to cut the checks, it’s saving both money and time to cut those authors from the list.
It’s also unclear to me why hand verification of each author is necessary. Even indie authors get spreadsheets from Amazon. Those spreadsheets include things like:

I can see one possible configuration of the required database tables in my head:

Then write an importer for each file from each publishing outlet and some good unit and functional tests for edge cases. If the royalties (including the publisher’s share) total the payment received, it’s good.
What still mystifies me: if this new royalty application has caused (or helped cause) so much consternation and cost since 2013, where’s the lawsuit for that?

Why Is Tina Pre-Announcing Now?

Let’s look at a timeline here:

The point is: these little boom cycles where EC crows about being able to pay their authors follow fairly closely on the heels of Ms. Dohner’s book releases.
Which begs the question: Given Laurann Dohner’s announcement of a new self-published series, what’s going to happen when Ellora’s Cave no longer has new bestselling titles from her to rely on?

Let’s look at that image up top again. 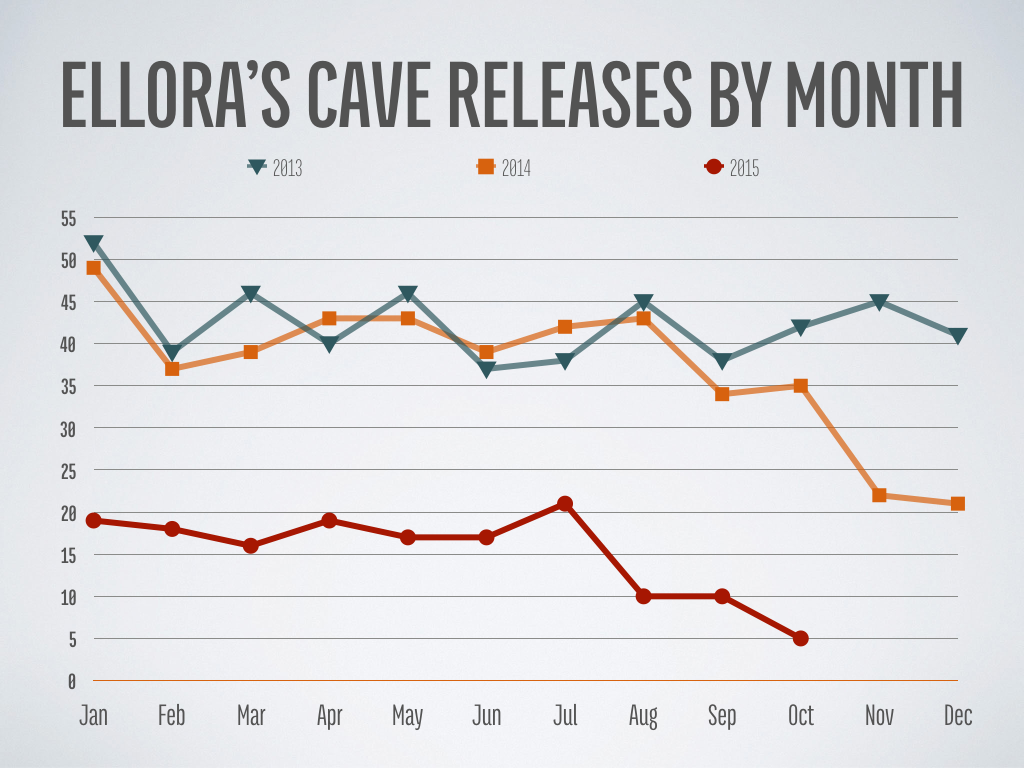 After the August 2014 layoffs, EC immediately dropped from nine to ten releases per week to eight for the first two weeks of September, then five for the third (which was the week The Curious Case of Ellora’s Cave was published). So there’s absolutely no way that Dear Author’s article could have triggered that change. The following week bounced back up to eight releases, but the last week of the month—the week that Ellora’s Cave filed suit against Dear Author and Jane Litte—went back up to nine releases.

Part of the reason for the drop was the elimination of the Blush line (though there still would be releases of already-contracted Blush titles), which had typically accounted for one or two titles on a Thursday release. Non-Blush EC titles were released on Wednesday and Friday.

Over time, the number of releases slid…no week in December 2014 had more than six releases in one week, and the final full week featured only three releases.

With the exception of July, releases for 2015 ran about half that of the previous year’s releases, dropping even lower by August.

What’s also interesting is that since October, 2014, Micah BlackLight’s The Cult of the Serpentari has comprised 27 releases—more than any whole month since October 2014—first as 24 volumes chapter-by-chapter (from October 2014 to April 2015), then three omnibus volumes published in May 2015. It seems pretty clear that the old pricing structure wasn’t working as 24 volumes worked out to be a lot of money.

I said to Rick, “I’m not quite sure what to say about this graph.” Except perhaps that romance writers came to feel about Ellora’s Cave the way majority owner Tina Engler/Jaid Black clearly feels about them.

Rick said, “Perhaps some arch comment about starting a new chapter in their business?”

11/16: I’d inadvertently deleted the final two rows of the dateline table when I had two edit windows open and continued in the wrong one. Only realized this a week later.